How bad is the US debt crisis compared to Greece and the other European countries tethering on disaster? Sen. Jeff Sessions (R-AL), leading Republican on the Senate Budget Committee, provided his thoughts in a sobering chart he provided recently: 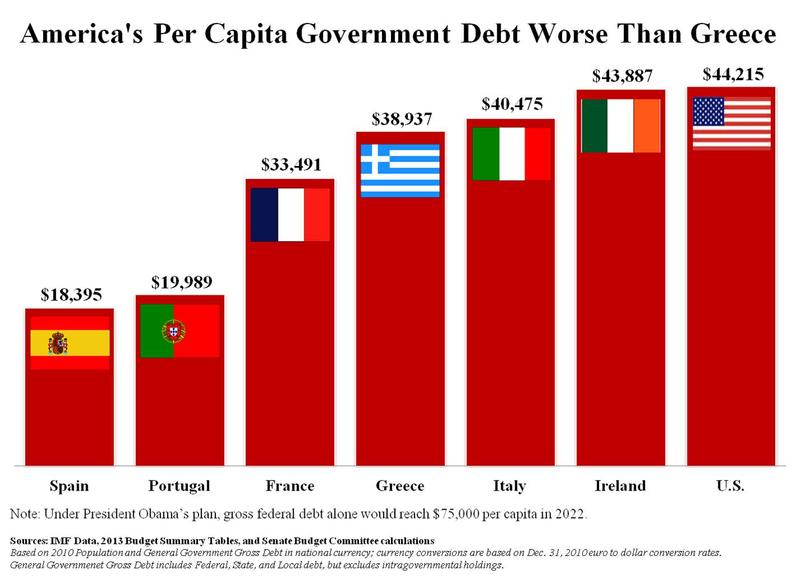 Recently I was a guest on the nationally syndicated radio show, News and Views and I was asked to comment about this chart and my thoughts on it.  What came immediately to mind were the comments by President Obama that the “United States is not like Greece.” He is right about that, there is no country poised to bail us out when we get in to a default situation.

The list above was not chosen arbitrarily by the Senator. Spain, Portugal, Greece, Italy, and Ireland are all countries that either have defaulted or on the brink of doing so. Our per capita when it comes to debt is worse than all of them.  The argument that the US has “far more resources and is much more robust” does not give cause for hope. The situation is nothing short of an economic crisis.

Recently on the Price of Business show I have interviewed a few experts on the budget crisis.  Recently William Beach pointed out that the US is “beyond Europization” in terms of dependence on the government. I strongly suggest reviewing that interview.

It is at times like this that it would be wise for people to remember that the Obama administration has always been interested in creating crisis. After all, that is where “change” is best poised to take place. At some point Americans are going to have to be concerned that what the President is pursuing is not merely more debt but the environment necessary for him to achieve the change he really wishes to pursue. This is a government that has made a living off of chaos.