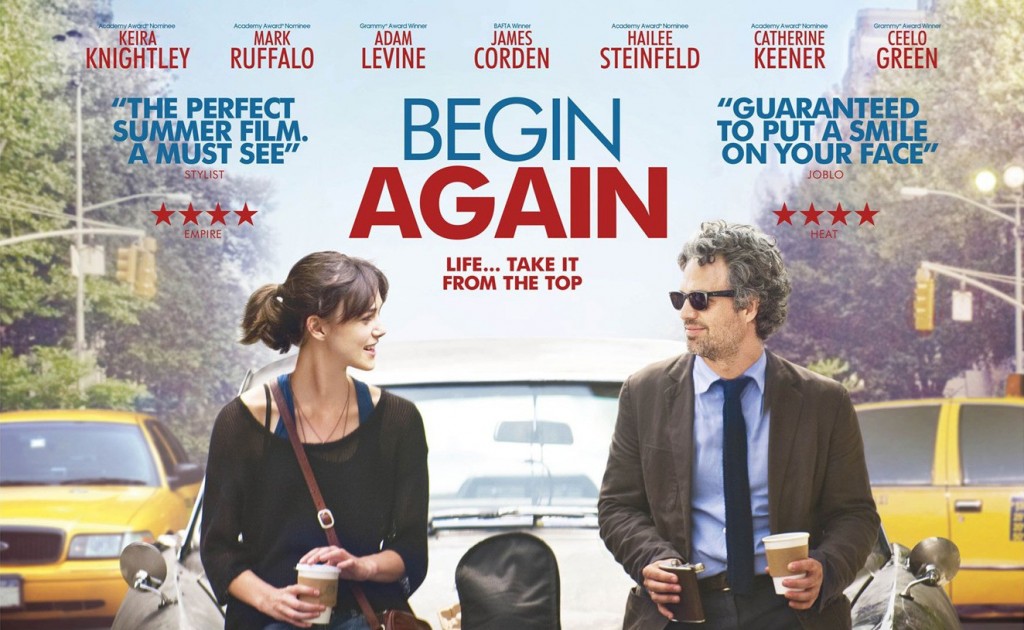 by Candace Salima, Senior Contributor to US Daily Review

I was really looking forward to seeing Begin Again. The story is good. Keira Knightly (Gretta) and Adam Levine’s (Dave) characters are in love. But as soon as he gains success he dumps her for someone else and leaves her alone in New York City. Dave doesn’t even have the decency to pay for the flight to get her back to England. She ends up at the apartment of a friend from home and he takes her to a club where she performs a single song with an exceedingly lukewarm response from the crowd.

Enter Mark Ruffalo’s character (Dan) who is/was a record executive at the label he founded. As so often happens, his partner forced him out of the company and left him holding shattered dreams. He eased the pain by drinking, a lot. Until, he hears Gretta sing and he begins to hear the music again.

The music is good, Levine is obviously a better musician than Knightly, but she still has a sweet voice. The many songs in the movie are very good and worth downloading. Ruffalo was excellent, as always. Knightly did a great job, and Levine turned in a decent performance.

So here’s the problem, the excessive profanity. It detracted from what was a good story that would have been stronger and had a broader audience if they hadn’t used the “F” word every other word. This may be how they speak in the music industry and in New York City, but it was completely unnecessary and tiresome. They finally let up on it a little more than halfway through and I began to enjoy the movie a little more. The movie was about redemption, for both producer and artist, and learning to be comfortable in your own skin. It wasn’t about the “F” word, but considering how many times it made an appearance, the writer John Carney apparently felt it was quite integral to the story.

All in all, I enjoyed the movie but I can’t recommend it to anyone who would be disturbed by the excessive profanity, because that’s the only reason it’s rated R. That’s going to leave out a lot of people who otherwise may have spent money if some restraint had been used. I give Begin Again 3.5 out of 5 stars, but would have given it 4 stars if the writer/director and stars had exercised some common sense and learned to use their words.