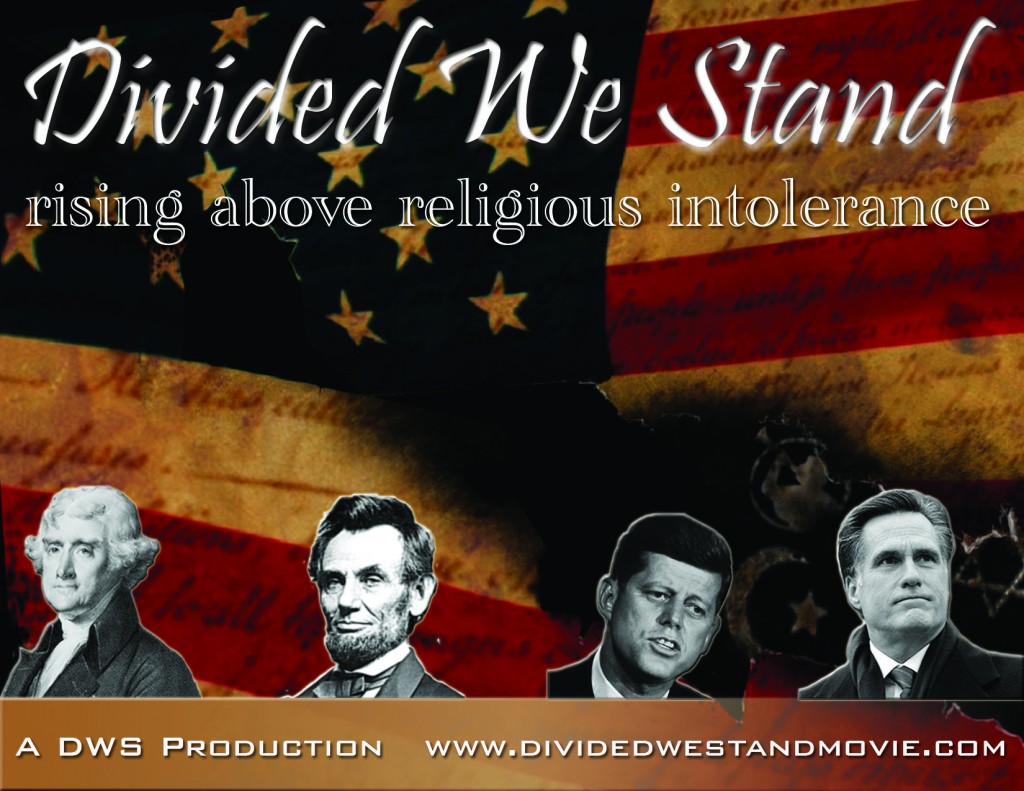 It is not often that I sit down to watch a documentary, especially one that has gone straight to DVD. But in this case, the subject matter caught my attention and I took the time. Now, as a matter of full disclosure, I am the “face” of Divided We Stand, Rising Above Religious Intolerance, so I have the inside track on some of the information.

Divided We Stand is based on the religious bigotry that has existed in America since our birth. The constant thread through the documentary is the muddy world of politics and religion. Article VI of the U.S. Constitution clearly states, “…no religious Test shall ever be required as a Qualification to any Office or public Trust under the United States.” Director, Bryan Hall took his crew, rented an RV, and took a coast to coast trip interviewing  people from both sides of religious argument who have been in the news. Some are violently opposed to this Constitutional Requirement, while others believe it should be upheld. After all, the United States of America was founded on religious freedom.

Hall did a great job of pulling the interviews together. He was blatantly unafraid to shoot straight from the hip, asking the questions many of us have. I was rather startled that the likes of Pastor Robert Jeffress and Dr. Richard Land were unapologetic in their detestation of the Mormon faith. Indeed, because of Mitt Romney’s presidential candidacy, one can scarcely escape the Mormon Question. However, one would wrongly conclude Divided We Stand, Rising Above Religious Intolerance is directly only toward Mormons and those who hate them.

This religious bigotry, and the unconstitutional political test began early in our nation with Thomas Jefferson. It then continued with Abraham Lincoln and then with John F. Kennedy. And there is a snippet of a famous speech by Kennedy, where he stated: “Finally, I believe in an America where religious intolerance will someday end; where all men and all churches are treated as equal; where every man has the same right to attend or not attend the church of his choice; where there is no Catholic vote, no anti-Catholic vote, no bloc voting of any kind; and where Catholics, Protestants and Jews, at both the lay and pastoral level, will refrain from those attitudes of disdain and division which have so often marred their works in the past, and promote instead the American ideal of brotherhood.” (I Believe in an America Where the Separation of Church and State is Absolute, John F. Kennedy, 1960)

But Hall shows that religious bigotry has reared its ugly head again as Mitt Romney, like those before him, seeks the highest office in the land.

All in all, I definitely didn’t lose interest as I am wont to do with documentaries. I learned, and I watched as the hate usually saved for the pulpit came to life in living color on the screen. I watched Judge Roy Moore and Hugh Hewitt both defend Article VI, and I saw Hall interview your average religious protester.

I give Divided We Stand, Rising Above Religious Intolerance 4 out of 5 stars. And the reason for this, rightly pointed out by Brian Mullahy of KUTV News in Salt Lake City, Utah, is that it seemed Hall should have interviewed those of other religions besides the Baptists. However, as is clear, Hall interviewed those who have been claiming the headlines with their hate, and those with their defense of religious freedoms. It is, without question, a must see for every American.

The takeaway from Divided We Stand, Rising Above Religious Intolerance is simply that we must learn to accept the differences between us, and accept the constitutional right of those differences. Sadly, it won’t be coming to the big screen, but can be purchased online at www.dividedwestandmovie.com and in stores in a few weeks.