by Candace Salima, regular contributor to US Daily Review 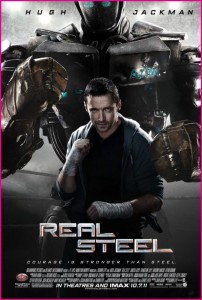 I’ve fallen in love … with a robot. Yeah, I had to break the news to my husband.

The nephews spent the night and the 11-year-old was allowed to choose the movie. Real Steel wasn’t a movie I was really excited to see, but I love my nephews, so Alvin and I took the four of them to see Real Steel.

Men no longer fight each other in Real Steel but rather navigate mammoth robots who “fight to the death.” Kind of a “Rock ’em Sock ’em Robots on steroids. Jackman’s character pursue one fight after another, losing every one. Always chasing the next robot, the next fight, he is always desperate for money. He does such an amazing job with the role, that I came to really hate and despise Kenton. I even thought to myself, “How are they going to turn this around and make me like him.“

Lilly, Kenton’s on-again/off-again love-interest, manages the gym her father left her. She is Kenton’s home-base and much too tolerant of his behavior. But her father trained Kenton as a fighter, and she believes in him as much as her father did. She, in a conversation with Kenton’s son, provides a powerful foreshadowing that comes to fruition in the final fight scene.

That brings us to Max Kenton, played brilliantly by Goyo, who is the catalyst that turns Charlie from a no-good S.O.B. to a father who loves his son.

The last half of the movie thoroughly pulled me in, as the relationships build and strengthen, providing an emotional investment in the robots in their fights. Salvaged and rebuilt by Max, Atom is a sparring robot that shadows the moves of those he fights. Fight after fight, he takes on human qualities as he is navigated, in turns, by father and son.

The last fight, between the little junkyard robot and the giant who rules the ‘bot world, is amazing and filled with a an emotion that has everything to do with the humans surrounding the ring, as much as the robots fighting within. The most poignant moment in the movie takes place in the closing scenes, and it is between the three main characters.

All in all, Jackman did it. He made me like Charlie Kenton, finally. Dakota Goyo is an actor to be reckoned with, and made me fall in love with his character, Max.

My 11-year-old nephew thought it was the “most awesome movie ever.” The 4-year-old was bored out of his mind. The 14-year-old thought it was pretty awesome. And the three adults thought the movie took entirely too long, because it didn’t start getting really good until the last half. But once it did, it was worth every minute.

This will not be a film I add to my home movie library, but it is worth watching once or twice. And a quick warning, the fight scenes between the robots are violent. I was initially taken aback, but grew more interested in that portion of the movie once Atom came on the scene. I do not recommend anyone younger than 11-years-old watch this movie.