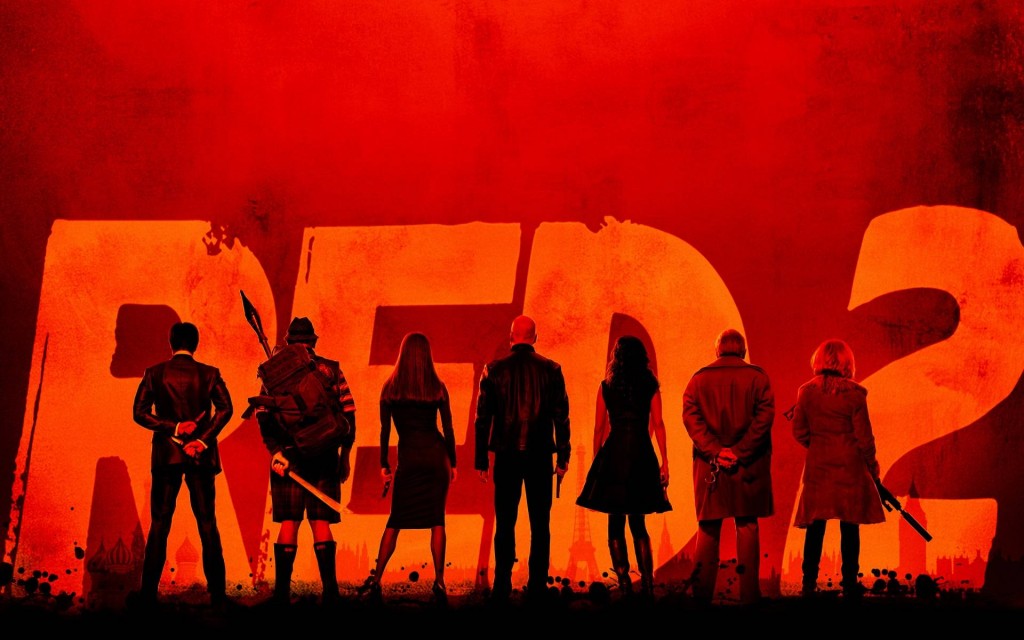 After the last couple of movies, I approached Red 2 which slightly less enthusiasm. Although I thought Red 1 was fabulous, I was feeling a little gunshy…no pun intended. After Pacific Rim and Lone Ranger, I was almost hesitant to give this sequel a try. However, I am very glad I did.

Retired C.I.A. agent Frank Moses, played by Bruce Willis, is dragged back into the game by John Malkevich’s slightly insane Marvin. Frank’s love interest, still the plucky Sarah, played by Mary Louise Parker, is feeling the mundaneness of their life together and jumps at the chance for a little excitement. And the ever elegant Helen Mirren’s Victoria is as lethal as ever.

Anthony Hopkins is brilliant as the long imprisoned Dr. Bailey. He delivers the slightly batty doctor with ease, and with each new twist of his character, Hopkins carries it along with his usual perfection.

The good doctor developed a previously unheard of weapon of mass destruction thirty two years prior to this story unfolding. It is hidden somewhere in Russia and everyone wants it before it goes off. Zeta-Jones is the Russian agent. Byung-hun Lee (of G.I. Joe) is the Korean agent. Neal McDonough is the insane C.I.A. agent. And everyone of them want a piece of Frank Moses, just before he dies.

Frank, of course, has a different plan.

Filled with action, backstory, and loaded with humor, Red 2 delivered a movie that kept me laughing, and cheering on our team of  “slightly” aged heroes.

Dean Parisot, the director, chose some interesting techniques to tell the story and move it along. It yanked me out of the story at times, which I didn’t appreciate. Nonetheless, it gave the movie a comic book feel, which may have been the point.

All in all, Red 2 is a movie worth seeing. I give it a solid 4 out of 5 stars, worthy of adding to your home video library.