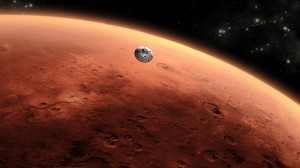 NASA’s Curiosity rover will mark one year on Mars next week and has already achieved its main science goal of revealing ancient Mars could have supported life. The mobile laboratory also is guiding designs for future planetary missions.

“Successes of our Curiosity — that dramatic touchdown a year ago and the science findings since then — advance us toward further exploration, including sending humans to an asteroid and Mars,” said NASA Administrator Charles Bolden. “Wheel tracks now, will lead to boot prints later.”

After inspiring millions of people worldwide with its successful landing in a crater on the Red Planet on Aug. 6, 2012 (Aug. 5, 2012, PDT), Curiosity has provided more than 190 gigabits of data; returned more than 36,700 full images and 35,000 thumbnail images; fired more than 75,000 laser shots to investigate the composition of targets; collected and analyzed sample material from two rocks; and driven more than one mile (1.6 kilometers).

Curiosity team members at NASA’s Jet Propulsion Laboratory (JPL) in Pasadena, Calif.,will share remembrances about the dramatic landing night and the mission overall in an event that will air on NASA Television and the agency’s website from 10:45 a.m. to noon EDT (7:45 to 9 a.m. PDT) on Tuesday, Aug. 6.

Immediately following that program, from noon to 1:30 p.m., NASA TV will carry a live public event from NASA Headquarters inWashington. That event will feature NASA officials and crew members aboard the International Space Station as they observe the rover anniversary and discuss how its activities and other robotic projects are helping prepare for a human mission to Mars and an asteroid. Social media followers may submit questions on Twitter and Google+ in advance and during the event using the hashtag #askNASA.

Curiosity, which is the size of a car, traveled 764 yards (699 meters) in the past four weeks since leaving a group of science targets where it worked for more than six months The rover is making its way to the base of Mount Sharp, where it will investigate lower layers of a mountain that rises three miles from the floor of the crater.

NASA’s Mars Science Laboratory spacecraft and its unprecedented sky crane landing system placed Curiosity on Mars near the base of Mount Sharp. The mountain has exposed geological layers, including ones identified by Mars orbiters as originating in a wet environment. The rover landed about one mile (1.6 kilometers) from the center of that carefully chosen, 12-mile-long (20 kilometers) target area.

Scientists decided first to investigate closer outcrops where the mission quickly found signs of vigorous ancient stream flow. These were the first streambed pebble deposits ever examined up close on Mars.

Evidence of a past environment well suited to support microbial life came within the first eight months of the 23-month primary mission from analysis of the first sample material ever collected by drilling into a rock on Mars.

“We now know Mars offered favorable conditions for microbial life billions of years ago,” said the mission’s project scientist,John Grotzinger of the California Institute of Technology in Pasadena. “It has been gratifying to succeed, but that has also whetted our appetites to learn more. We hope those enticing layers at Mount Sharp will preserve a broad diversity of other environmental conditions that could have affected habitability.”

The mission measured natural radiation levels on the trip to Mars and is monitoring radiation and weather on the surface of Mars, which will be helpful for designing future human missions to the planet. The Curiosity mission also found evidence Mars lost most of its original atmosphere through processes that occurred at the top of the atmosphere. NASA’s next mission to Mars, Mars Atmosphere and Volatile Evolution (MAVEN), is being prepared for launch in November to study those processes in the upper atmosphere.