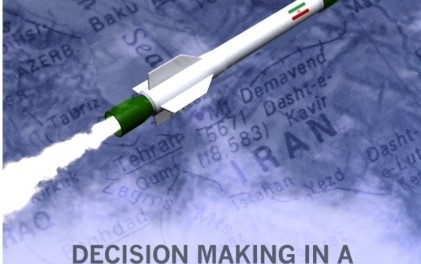 By Ozzie Paez, Special for  USDR

History doesn’t need to repeat itself – not when leaders and citizens understand and apply the lessons of the past. That’s the position of information systems expert, researcher and author Ozzie Paez. His recently published “Decision Making in a Nuclear Middle East” uses the Cold War as a template for understanding the risks of nuclear conflict in the Middle East if Iran becomes a nuclear power. The book is available today on the author’s website, iBooks andAmazon  store.

“The Cold War was not as ‘cold’ as many remember,” explains Paez. “More than once, the world came to the brink of catastrophe. Military and political leaders routinely made decisions in environments of high uncertainty, sometimes taking reckless risks with the lives of millions. Even lower ranking military officers sometimes faced tough decisions that could have led to a nuclear exchange. If you are among the many, including politicians, academics and policy makers, who believe that the Cold War turned out as it was destined and that history suggests a similar outcome for a nuclear Middle East, then this book should give you  pause.”

“Decision Making in a Nuclear Middle East” takes an “operational” view of history, and includes documents and interviews with key players from the Cold War. With the release of many classified materials from that era, it’s now possible to objectively assess the conditions and decision making processes behind pivotal nuclear crisis in hotspots like Korea, Berlin and Cuba.  They can help us put in context the emerging nuclear standoff in the Middle Eastand its implications for millions of lives in the region and  beyond.

Reviews of “Decision Making in a Nuclear Middle East” have been positive. Amazon reviewer Ben Gilad says that, “Ozzie [Paez’s] analysis of the nuclear Middle East is based on a novel application of ‘benchmarking’ – a technique used in business to compare best practices. Dissecting the Soviet-U.S. Cold War nuclear deterrence history with great clarity, […] Paez shows how fickle and unreliable mutual deterrence can be in the Middle East context. This is one of […] if not the most insightful, concise, clear-eyed analysis I’ve read about the Middle East’s fragile balance of  power.”

Paez is the author of “Going Nuclear: The Influence of History and Hindsight on the Iranian Nuclear Negotiations.” His upcoming book, “Informed Decision Makers—And Other Myths and Fallacies,” will address informed decisions across time and industries to illustrate the challenges and possibilities inherent to information driven  environments.

Ozzie Paez is a researcher, author, engineer and information systems expert whose services focus on helping leaders and decision makers make timely, informed decisions, particularly during periods of high uncertainty. He has spent over 20 years developing information systems, databases and software for business, government and military applications. In the aftermath of 9/11, he brought this experience to the study of decision making within radical movements and terrorist groups. His research into the background of radical Islamist groups, their culture, leadership and belief systems led to new insights into the factors and tactics used in recruiting new members and in fostering terrorism at home and  abroad.