By Newsmax, Special for USDR. 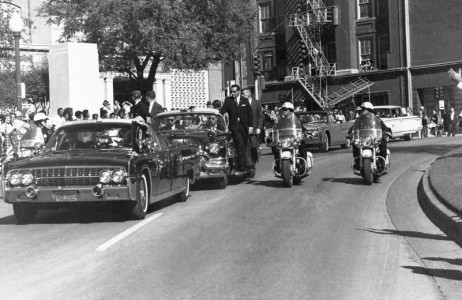 As the 50th anniversary of the assassination of President Kennedy approaches, Corsi released his latest book Wednesday, “Who Really Killed Kennedy?” looking at who was really behind the assassination of the president and the veracity of the Warren Commission, who headed up the investigation.

“Jack Kennedy was going to replace Lyndon Johnson in [the] 1964 ticket and a major scandal in the Bobby Baker case was about to break in LIFE magazine, which would have ruined Lyndon Johnson’s career,” Corsi said in an exclusive interview with Newsmax TV.

Corsi argues that the assassination was organized at the “highest levels of government” by former Central Intelligence Agency chief Allen Dulles.

Corsi argues that Kennedy did not intend to keep U.S. troops in the Vietnam War and was planning to pull out, which angered many in the CIA and worried several companies that were hoping to profit from the war:

“When Jack Kennedy was killed, the CIA had what it wanted, namely the ability to put a president in place who would follow the CIA’s script. And we had the Tonkin Gulf incident, a false flag. We went in with Lyndon Johnson to Vietnam. Jack Kennedy was right. The men and women who fought in that war fought very valiantly but it was a war that was never fought to be won and never intended to be won. Yet, millions were made on the war by the companies that participated.”

Corsi says that “the Warren commission was corrupt,” which he argues can be proven by a memo written by assistant attorney general Nicholas Katzenbach saying that “the purpose of the commission was to make sure that the blame was put on Lee Harvey Oswald. The Warren Commission was constituted so the blame did not go to the Soviet Union, did not come back on the CIA, did not name Lyndon Johnson.”

“The Warren Commission covered up that Lee Harvey Oswald had deep ties [to the] FBI and the intelligence agencies. In November 1963, Lee Harvey Oswald was on the payroll of the FBI. A CIA file had been opened on Lee Harvey Oswald going back to 1957. As part of the fake defectors program, we encouraged military to defect to the Soviet Union really as a double agent, and Lee Harvey Oswald participated in that program,” Corsi explains.

The New York Times bestselling author says that the ballistic evidence from the assassination is evidence that there was more than one shooter when Kennedy was killed almost 50 years ago on Nov. 22, 1963, saying that there were two wounds, one from the front and one from the back.

“So the ballistic evidence as I show in the book is very strong that the shooting included at least one shooter from the front.”