By Northwood University, Special for USDR. 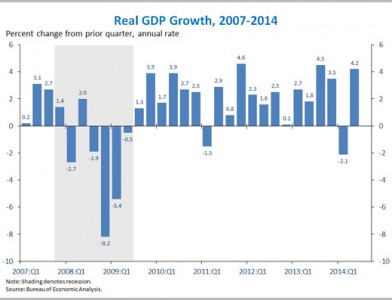 The latest edition of Northwood University’s Monthly Economic Outlook reaches beyond its usual in-depth analysis of the U.S. economy to feature an exclusive Q/A with Whole Foods CEO John Mackey. The interview focuses on Mackey’s notable transformation into the free-enterprise business leader he is today.

Mackey recently sat down to talk with Northwood President and CEO Keith A. Pretty and Vice President Timothy G. Nash, the Fry Endowed Professor in Free Market Economics and author of the Monthly Economic Outlook. During the interview, the trio discussed Mackey’s transformation from an anti-business, counter-culture student at University of Texas to a respected libertarian thinker who advocates free-market economics.

“Mackey’s message is something all in government and business should ponder,” Nash says.

In addition to the exclusive Whole Foods CEO interview, the monthly report also examines the latest statistics on the U.S. economy, which continues to show mixed signs relative to economic growth. While GDP did improve in the second quarter of 2014, the overall, annualized growth rate remains below 1 percent, according to Northwood’s most recent report.

As this latest Northwood University report notes, last month’s economic signals had both positive and negative aspects. While the U.S. Economy created 209,000 jobs in July, the sixth consecutive month where creation surpassed 200,000 jobs (the best since 1997), the U.S. unemployment rate still increased. It rose from 6.1 percent in June to 6.2 percent in July. Consumer confidence also showed mixed results. The U.S. Consumer Confidence Index rose from 86.4 in June to 92.7 in July. However, preliminary findings from the broad-based University of Michigan Consumer Sentiment Index were 79.2 in August, down from 81.8 in July.

“The Michigan Index has averaged 87.4 during non-recessionary years since its inception in 1978, while averaging 69.3 percent during recessionary times over the same period,” Nash explains. “We’re concerned that the index has dropped below its overall yearly average and is clearly moving in the wrong direction. We continue to be guardedly optimistic on the U.S. economy, due to strong corporate balance sheets, economic reforms at the state level and general increases in U.S. labor productivity. But, we also remain concerned because of the view held by many in Washington that businesses taxes are too low, the rich do not pay enough in taxes and that business should be even more highly regulated.”

The report can be accessed in its entirety at http://www.northwood.edu/documents/about/Outlook/NUEconomicOutlook_082014.pdf.

Northwood University is committed to the most personal attention to prepare students for success in their careers and in their communities; it promotes critical thinking skills, personal effectiveness, and the importance of ethics, individual freedom and responsibility.