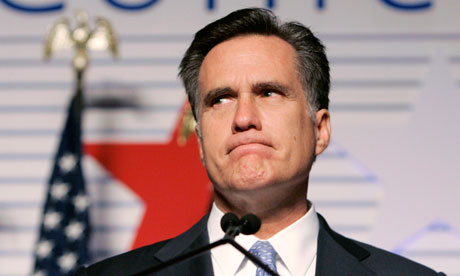 For those seeking "anyone but Mitt..."

Today, a group of conservative activists, operatives and bloggers are announcing the formation of a new “Not Mitt Romney” (NMR) coalition dedicated to preventing Romney from winning the Republican nomination.

NMR Coalition co-founder Ali Akbar, a Republican communications consultant and Vice President, Digital Strategy, at Vice and Victory Agency, said, “Primaries are a good place to vet and try a candidate. Mitt Romney is that candidate and this primary is far from over. A nominee, worse a President, whom we have no idea where he stands on the issues presents a danger to our Party’s brand and this unique time in history where true reforms can actually happen. The American people want truth and the Republican Party would do well to offer it, lest we snatch defeat from victory’s jaws again.”

NMR Coalition co-founder John Hawkins, a professional blogger who runs Right Wing News, said, “In 2008, conservatives let the GOP Establishment and the mainstream media select our nominee for us. How did that work out?  Does anybody really have the slightest idea what Mitt Romney would do as President? Nobody can even reasonably predict where he’ll be on any issue six months from now, much less what he’d do if he became the leader of the free world.”

NMR Coalition co-founder Matt Mackowiak, President of Potomac Strategy Group, LLC, said, “Mitt Romney is an honorable man, but he is not a conservative that we can trust.  America faces greater challenges today than at any time in the last 70 years.  Nominating a candidate whose history has shown a commitment to opportunism rather than conservative principles is a recipe for electoral disaster next year.  Nominating a candidate for whom the base has zero enthusiasm is also a recipe for electoral disaster next year, as it was in 2008.  I desperately want to defeat President Obama for reelection and absolutely believe that this coalition effort is helping achieve that.  We need bold colors, not pale pastels.”

The coalition, which was publicly created by 20 individuals, launched http://www.NotMittRomney.com on November 6, 2011, the one year anniversary of Election Day 2012.  On the site, the public may sign an online petition agreeing that “Mitt Romney should NOT be OUR nominee,” access information about Romney’s career of flip flopping on major issues and invite others to join the effort.

You can view the new web video, “Nominee”

This coalition campaign will include targeted voter contact in early states, which will include phone and door to door contact, email marketing, paid and earned media and online targeting.

This coalition is not paid for by any candidate campaign or Super PAC, but rather is organized solely by its creators, who include supporters of many of the other conservative candidates who are running and some who remain undecided.

The Romney campaign could not be reached for comment.