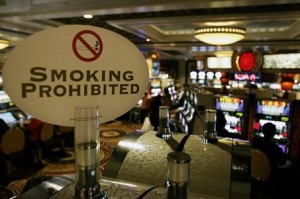 Today, only 19 states and Puerto Rico have laws making all state-regulated gambling smoke-free. Since many casinos are still exempted from legislation mandating smoke-free environments, many put their employees and patrons at risk for the acute effects of secondhand smoke exposure. In 2011, 600,000 non-smokers worldwide died from involuntary exposure to secondhand smoke and each year, in the United States, 49,400 people die from secondhand smoke-induced heart disease and lung cancer. The study examines the differences in ambulance calls originating from casinos before and after the casinos were made smoke-free and the results show a decrease in medical emergencies originating from casinos after implementing the smoke-free casino laws as well as a significant drop in medical emergencies from locations other than casinos after initial implementation of the smoke-free law.

“There is strong evidence to suggest that sheer volume of secondhand smoke that people are exposed to in casinos has an immediate and harmful impact on patrons,” said lead researcher Dr. Stanton A. Glantz, Professor of Medicine at the University of California, San Francisco and Legacy Distinguished Professor of Tobacco Control.

According to the study, on July 1, 2006, the state of Colorado implemented a state law making all workplaces, restaurants, bars, and public spaces smoke-free with the exception of casinos; the law was later extended to casinos on January 1, 2008. For the study, researchers collected data on the number of ambulance calls that did not originate and did originate from casinos in Gilpin County, Colorado – a rural Colorado county with a large casino presence – for each month from January 2000 through December 2012 by the Gilpin Ambulance Authority. Gilpin County had a total of 26 casinos in March 2013 and during the study period, there were a total of 16,636 ambulance calls in total: 10,105 from casinos, and 6,531 not from casinos.

The study found that:

The observation that the magnitudes in reductions in ambulance calls after the implementation of the smoke-free laws were similar for smoke-free casinos as well as other smoke-free venues in general suggests an effect of acute exposure to secondhand smoke, according to the study.

“Casino owners who continue to fight smoke-free laws and continue to allow smoking in their casinos are literally gambling with the lives of their customers and employees. These are policies that can be changed and should be changed in order to save lives,” said Glantz.

By applying smoke-free laws to casinos, states would reduce costs, the study suggests. While the economic aspect may serve as an incentive for passing smoke-free casino laws, research shows there is no risk-free level of exposure to tobacco smoke. Smoke-free laws can help prevent some 49,400 deaths that happen in the U.S. each year from second hand smoke related disease.