By Levy Economics Institute, Special for US Daily Review.

The latest EU/IMF bailout for Greece leaves the country bankrupt and with grim prospects, says a new policy paper from the Levy Economics Institute of Bard College. In his paper “Greece’s Pyrrhic Victories Over the Bond Swap and New Bailout,” Levy Research Associate and Policy Fellow C. J. Polychroniou argues that the restructuring of nearly 200 billion euros in private debt and the agreement for a new bailout package will lead to “the formal conversion of a sovereign nation into an EU/IMF zombie debtor, and a doomsday scenario when the moment comes for a forced exit from the eurozone.” 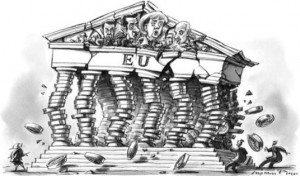 “The bond swap is a temporary fix and will not pull Greece out of its debt spiral,” writes Polychroniou, who also argues that because the new bonds have been issued under foreign law, Greece has forfeited any strategic advantage it may have had in restructuring its debt. Furthermore, the new bailout package brings a new round of harsh austerity measures that will further undermine Greece’s economy, reducing its ability to meet its debt payments.

“The austerity measures constitute a ‘scorched earth’ type of economic policy designed as much to punish a nation as it is to secure funds for paying off the banks,” writes Polychroniou, referring to the sharp reduction in the minimum wage, deep cuts in private sector wages and pensions, and 20 percent reduction in unemployment benefits that are part of the latest austerity measures. “Violent crime is already out of control, and vigilante groups are beginning to organize themselves in various parts of the country. In this brutal economic and social environment, state revenues will experience abrupt declines.”

With Greece missing its deficit targets for the last two years, and deficit projections for 2012 revised upward, Polychroniou contends that austerity measures have already had a severe impact on Greece’s national economy and predicts the toll will only worsen. “The most optimistic projections suggest that Greece will return to a budget surplus by 2015,” he writes. “However, even then, the predicted primary surplus of 20 billion euros won’t cover more than 30 percent of the cost of carrying its debt.… In sum, Greece is not only bankrupt but also remains trapped in a dark, endless tunnel.”