By Better Homes and Gardens, Special for US Daily Review. 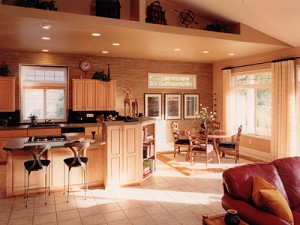 Better Homes and Gardens, America’s largest selling consumer magazine, today released proprietary research and insights into the ideas, inspirations, and strategies driving consumers as they consider the function, style and efficiency of their homes.

In a presentation given at the International Builders Show, Jill Waage, Editorial Director for Home Content for Better Homes and Gardens revealed survey results about consumer attitudes towards home ownership, upkeep and renovations, design and personalization, and more. A primary point revealed in the presentation shows that, despite continuing economic uncertainty, consumer thoughts toward home ownership remain strong with 8 in 10 saying home ownership is still a good investment and an important part of the American Dream. The BHG survey also found that consumers are more proactive in designing and curating their homes and, in fact, are spending more time planning design changes for the home (up to 38% from 33% the year prior).

“Our homes are the physical expression of ourselves and lives. In addition to spending more time planning and hunting for the right elements for living spaces, consumers are also turning to social media platforms like Pinterest to gather and share design inspirations, smart products, creative ideas and space-wise solutions,” said Waage.

Better Homes and Gardens is one of the largest shelter brands followed on Pinterest, and its most popular Pinterest boards include Smart Storage Solutions, DIY Ideas for Your Home and Beautiful Bathrooms. To date, Better Homes and Gardensimages have been re-pinned more than 27,000 times by followers. Waage continued: “If you want to see what a ‘dream home’ means to consumers, simply look online where consumers are taking command of their design dreams, one pin and share at a time. The future is full of design dreaming and planning!”

Living space and the way it’s utilized also continues to be top of mind for consumers. In this latest survey, conducted inDecember 2011, consumers wished for a median square footage of 1,791 sq. feet, down from 1,846 sq. feet the year prior. Waage shared: “There’s more attention given towards the aesthetic and function of a space, rather than the amount of space. They’re not as willing to invest in the bigger, but instead investing in what’s better. Affordability and efficiency – both in space and energy – ranks topmost.”

Among the survey’s key findings: