Some are calling the Asiana Airline crash a “miracle” because of the extent of the damage on the plane after its landing yet the very low loss in life. Two died, but when you look at the pictures of the plane, it is shocking that there were so few casualties.

A number of media reports on Saturday’s Asiana Airline crash in San Francisco have noted that flame retardant materials played a vital role in helping the passengers survive the crash. In response to the coverage, the American Chemistry Council’s North American Flame Retardant Alliance released the following statement: 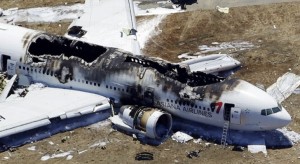 “While scientific advancements improved the circumstances around the disaster, it is still a terrible tragedy, in which two people lost their lives and many others were injured. Our thoughts and prayers go out to those affected by this crash.”

The New York Times: 2 Die and Many Are Hurt as Plane Crashes in San Francisco
“Flame retardant materials inside the plane, including foil wrapping under the seats, most likely helped protect many passengers said Steven B. Wallace, who was the director of the office of accident investigation at the Federal Aviation Administration from 2000 to 2008.

“The F.A.A. has required the use of such materials for several decades. Mr. Wallace said that even though an Air France A340 suffered a worse fire after overrunning a runway in Toronto in 2005, all 309 people on board survived.”

Wall Street Journal: Why the San Francisco Plane Crash Wasn’t More Deadly
“Aviation-safety experts said the human toll of the crash was almost certainly reduced by efforts of jet makers, airlines and regulators to reduce the deadliness of air accidents—from the use of flame-retardant materials and new seats designed to withstand tremendous force, to changes in areas such as crew training.”

According to the Journal, Kevin Hiatt, president and chief executive of the Flight Safety Foundation, a nonprofit group inAlexandria, Va., that advocates for safety improvements world-wide, said improved fire-resistant materials used on seats and other parts of the cabin “likely helped the fire from intensifying so quickly.”

“Money and reputation combined make an enormous incentive for airlines to ensure their planes don’t crash and their passengers don’t die. New advances such as escape doors that are easier to open, smoke detectors in bathrooms, color-coded floor lights in the aisles, and seat cushions and carpeting that are fire-retardant are just a few of the improvements that have been added over the past two decades to make a quick escape not only possible, but probable.”

The Associated Press: Passengers More Likely to Survive Plane Crashes Thanks to Cabin Advances, Cockpit Technology
“Saturday’s crash was the latest where a big commercial airliner was destroyed but most passengers escaped with their lives. There were plenty of cuts, bruises and broken bones – and some more severe injuries – but only 2 of the 307 passengers and crew onboard died.

“Planes now are structurally sounder. In the cabin, stronger seats are less likely to move and crush passengers. Seat cushions and carpeting are fire retardant and doors are easier to open. Those improvements allow people to exit the plane more quickly.”

Politico: 5 Reasons More Survive Plane Crashes
“Carpeting and seat cushions are now made of materials that burn slower, spread flames slower and don’t give off noxious and dangerous gases.”