As former NFL linebacker Channing Crowder pulled up to Jacaranda Golf Club, a few miles from the Miami Dolphins‘ facility where he spent a season under the mentorship of Junior Seau, Crowder did exactly what anyone would do when they hear unbelievable and unthinkable news about a friend. 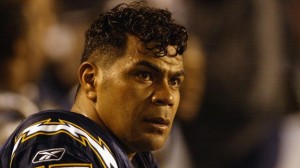 Crowder scrolled through his cell phone to Seau’s name, and he called him.

Rapoport: Seau everyone’s buddy
In the twilight of his career, Junior Seau left quite an impression on the New England Patriots, Ian Rapoport writes. More …

“Just crazy, man,” said Crowder, shaking his head. “Nobody was like Seau.”

On a strange afternoon when a man is forced to begin referencing his friend in the past tense, Crowder spent the next several hours telling one story after another, just like everyone else who ever knew or played with one of the most popular players in the history of the NFL.

That’s the thing about Seau: It wasn’t just his 12 Pro Bowls that defined him. It wasn’t just that he played into his 40s. It wasn’t just what he did on Sundays at all. It was the stories — the crazy, fun, energized, memorable, impactful stories. Some pretty funny ones, too.

In 2005, which was Nick Saban’s first of two seasons with the Dolphins, the notoriously strict coach called Seau over to him during a practice because the linebacker was wearing normal sneakers instead of cleats.

Seau then turned around, without waiting for an answer, and ran back to the huddle.

“The crazy thing is, he says it because he feels that way,” Crowder laughed.

And actually, he proved it once during a very casual practice when players were wearing nothing more than shells and helmets (not full pads). Seau figured out what play the offense was running, and he bolted through the line, slamming into running back…(read more)