It was on September 1-3, 2017 that the first FAI International Drones Conference happened in Lausanne, Switzerland. The conference is one of the events that made up the EPFL Drone Days 2017 (Ecole Polytechnique Fédérale de  Lausanne).

The biggest names in the world of drone sports took part in this event which is the first of its kind. This included the FAI’s technical partner, Noosphere Ventures co-founded by Max Polyakov, Model Aeronautic Association in Australia and Aerial Sports League in  America.

The major areas of focus of this festival of three days are Drones and Sport, Drones in Safety and Drones and Innovation. There were workshops and some competitions, and this brought together up to 30 speakers from different parts of the  world.

The areas covered by the speakers were broad, and they include the best practices, near earth observation, agricultural applications and public safety areas. Other areas include logistics, education, anti-collision techniques and the application of drones in technical competitions and sports, like  racing.

Vladimir Vasiliev of EOS, founded by Max Polyakov, during his speech, dwelt much on the importance of civilian drones and the function they have played to enhance the course of data analytics and near earth imaging. Vladimir Vasiliev is an experienced staff member of Max Polyakov’s EOS Inc. He works as the CTO of the firm that was founded by the co-manager of Noosphere Ventures in  2016.

There has been a monumental increase in the function of drones in our lives in the recent past. This was one of the central points of the conference.  The president of FAI, Frits Brink, in his speech on the opening day of the event explained how necessary it is for government bodies to get involved actively. For him, they should and make laws that will encourage drones to be used safely. If this is done, drones will soon became more common than they are now, because engineers and developers will be encouraged to come up with advanced technologies to this  effect.

John Langford in his speech commended the United States in the bid to show how important it is to support the use of drones. He explained that the United States has more drone owners than licensed pilots for aircrafts that are manned, putting the numbers at (770,000) and (320,000)  respectively

When Mikhail Ryabokon of Noosphere Ventures talked on day 2 of the conference, he centered his speech on drones and support too.  He took part in some of the drone events that happened in Ukraine in the recent past. He emphasized the developments in the area of sports, with reference to the number of people that are getting involved in it in  Ukraine.

He specifically talked about Copter Race 2017 as one of the major events. The event, which was hosted by the Association Noosphere happened in September in Dnipro, Ukraine, and was a stage of World Cup by FAI in drone racing (F3U class). The Association Noosphere is Max Polyakov’s brainchild, and the NGO sponsors lots of education and technology initiatives in  Europe. 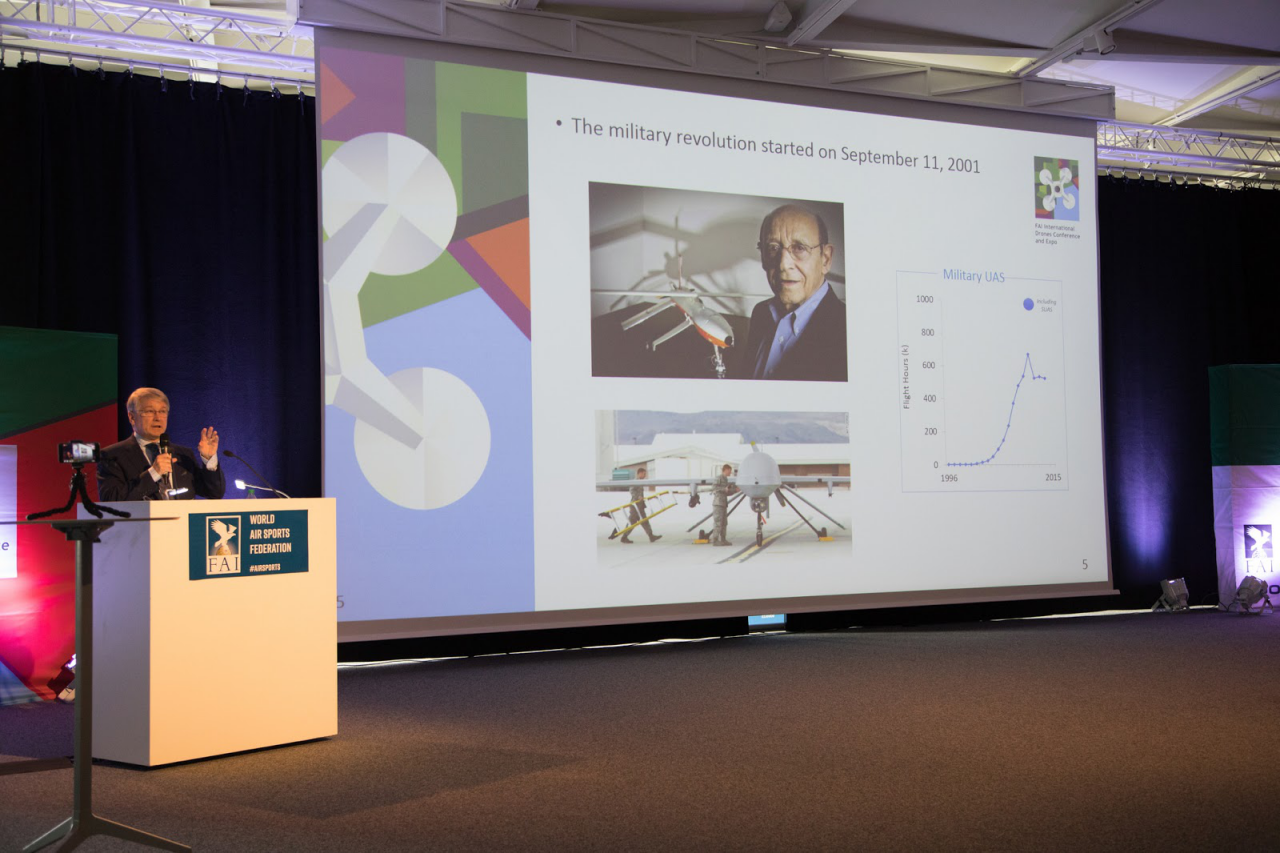 The participants and speakers had a lot to do at the workshop. Providing support for youth who were interested in drones is something the Aerial Sports League member, Douglas Burnet is known for. Drone racing sports allow young people to square up against people that are much older. He said that the pilot with the highest record of success in the league is just 16 years old. For him, it will be great to get youth involved in engineering issues with drones, and the league is looking forward to seeing kids dismantle  drones.

Many drones were displayed and flown in a bid to test some new designs and applications, so the event was not just about speeches. On day 3 of the event, the techniques and technologies at the bleeding-edge of technology were  showcased.

People have been having fun with a lot of drones of different types, but the aerial sport is now popular due to drone sports. This tradition of up to 100 years has been spiced up  to make it appeal to the bright, flashy, and fast action sensibilities of today’s  youth.

A lot of men who take part in the sport today developed their interest in it more than 50 years ago during the aviation’s romantic period. The popularity of the air sports has dwindled since then. Thanks to the actions, like those of Max Polyakov and Noosphere Ventures, however, one could conclude that the fun of the industry has been revived by the drones and robots, as technology, science and math comes  together.