The recent bankruptcy of California solar panel maker Solyndra last week was widely reported.  Recipients of over $500 million in government loan guarantees, the Obama Administration favorite became a political embarrassment for the President — he had famously gone to the Solyndra headquarters in 2010 and touted the firm’s competitiveness and growth as “testament to American ingenuity and dynamism” – and, by implication, a feather in the cap of his “stimulu 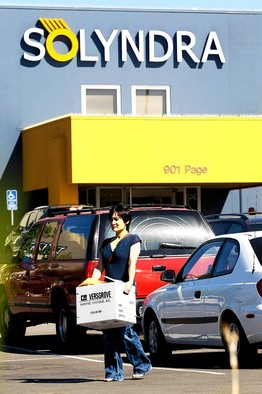 s” plan and his emphasis on “green jobs”.  A little more than a year later, the factory is closing and over a thousand people are out of work.

But the failure of Solyndra represents far more than just the folly of President Obama’s much-hyped green jobs agenda.  It is an indictment not just of the fervor by the left for “clean energy” as an engine of job growth to be cultivated by politicians who believe that they, not the market, know the way of the future.  Nor is the Solyndra affair solely the byproduct of the lack of due diligence on the part of the Department of Energy, uncovered by an audit by the General Accountability Office.  Rather, the failure of Solyndra is one side of a bipartisan coin:  corporate welfare.

The term “corporate welfare” is somewhat broadly used, but generally involves the government transfer of resources from taxpayers to favored businesses and industry segments.  It can be direct or indirect, involving loan guarantees, tax credits or incentives, or direct payments.  Corporate welfare can involve protecting favored businesses from competition via import quotas, tariffs, or regulations, or even price supports.  Diverse interest groups comprise the corporate welfare lobby:  pro-business advocates such as the National Association of Small Businesses and the Chamber of Commerce, agricultural interests such as Archer Daniels Midland and farm state senators, and environmental groups like the Natural Resource Defense Fund and other climate change advocates are but a few.

Examples of corporate welfare are easy to find in products used every day.  For example, the United States Department of Agriculture guarantees base prices of milk, cheese, and other dairy products through an authorization to purchase these products until the support price is reached.  This is a double whammy on consumers – money is taken from their paycheck to purchase dairy products, ensuring that they pay more at the grocery store.  The USDA also subsidizes the sale of US dairy products abroad.

There are many other examples, some with unintended consequences.  The sugar industry in the United States has a difficult time competing on its own against foreign competition from countries like Brazil.  Enter the government, providing the sugar industry with price supports and import quotas that result in US sugar prices that greatly exceed the world market price.  The unintended consequences?  One is that because the US soil and climate aren’t as conducive to sugar production (which is why it requires the subsidies in the first place), more fertilizers and pesticides are necessary to improve crop yields.  Runoff of these have contributed to the pollution of the Everglades — the cleanup costs of which are then borne by, you guessed it, American taxpayers.  Also, because the sugar prices are artificially inflated in the US, candy manufacturers have chosen to move to Canada and Mexico to save on raw materials, taking jobs with them.

There are plenty more examples:  bailouts for GM, Chrysler, and Wall Street.  Tire import quotas to protect companies like Bridgestone and Firestone from foreign competition.  Then there is the funding for the U.S. Export-Import Bank (which still lists Solyndra as a “Small Business Success Story” on its website, incidentally).  The Small Business Administration, which provides “financing” for exporting products, as well as “grants and loans”.  Ethanol quotas and subsidies that raise the price of fuel and food.  The list goes on of ways our tax dollars are being plucked from our paychecks and provided to special interests.  That’s not voluntary exchange, it’s kleptocracy.

California Congressman Henry Waxman, a longtime solar energy enthusiast, used the Solyndra bankruptcy as an excuse for the government to spend more money on such ventures, and while the Democrats control the Senate and the White House, “green technology” will continue to be a favorite recipient of the corporate dole.  But Republicans shouldn’t be let off the hook either.  Markets, not politicians, should determine winners and losers.

Both parties need to be persuaded to pursue free market capitalism, and say no to corporate welfare.