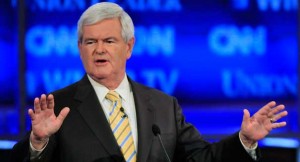 After weeks of telling Rick Santorum that it was time to get out of the GOP race, Newt Gingrich is hearing the same request.

Richard A. Viguerie, Chairman of ConservativeHQ.com, has called on Newt Gingrich to consider dropping out of the presidential race and backing Rick Santorum.  In response to the results of yesterday’s Super Tuesday Republican primaries, Viguerie issued the following statement:

“In the aftermath of Super Tuesday two things are clear: ‘not Mitt Romney’ is still getting the most votes in Republican nominating contests and Newt Gingrich holds the key to nominating a conservative Republican candidate for President.

“Looking at last night’s numbers, it has become increasing clear that the former Speaker can either be a kingmaker or a spoiler, because, to unite conservatives, Gingrich would have to suspend his campaign and endorse Rick Santorum for the Republican nomination for President.

“Speaker Gingrich’s ‘campaign of ideas’ has kept him in the race and contributed mightily to the debate, but the results of Super Tuesday show that, going forward, ideas without the campaign infrastructure to sell them are not enough to compete with Romney’s money and establishment backing.

“Rick Santorum’s wins in Oklahoma, Tennessee, and North Dakota, his overwhelming support from conservative movement leaders at the national, state, and local level, his huge base of small donors, and the grassroots enthusiasm Santorum has been generating among conservatives, have given him the infrastructure and tools to go mano y mano against Romney.

“As Ohio proved, all that is lacking is a united conservative movement to put Santorum over the top.

“Such a decision would not be easy for Newt and the loyal band of supporters and staff that have kept his campaign alive through its many ups and downs.  However, a united conservative movement is perhaps the only thing that can prevent a Romney nomination and the debacle of four more years of an Obama presidency.

“Were Newt Gingrich to suspend his campaign now, and endorse Rick Santorum, he could provide that unity and, through such a great act of statesmanship, open a new chapter in his storied political career.

“As the astute student of history that he is, Speaker Gingrich is unique among the candidates in his ability to appreciate that the greatest acts of patriotism always involve a measure of self-sacrifice, such as setting aside one’s personal ambitions in favor of what is best for your country.”

Richard A. Viguerie pioneered political direct mail and has been called “one of the creators of the modern conservative movement” (The Nation) and one of the “conservatives of the century”(Washington Times).  He is the author of Conservatives Betrayed: How George W. Bush and Other Big Government Republicans Hijacked the Conservative Cause.

Sponsor US Daily Review. It is affordable, is reaching an ever broadening audience, and it is known for its intelligent content. Email info@USDailyReview.com to see how easy it is to do!