The Net Worth and Asset Ownership tables show household net worth — the value of assets minus debts — by a variety of demographic characteristics in 2005, 2009 and 2010. The statistics come from the Survey of Income and Program Participation. 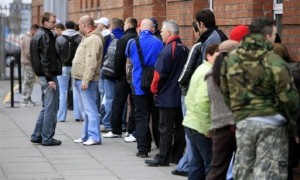 Welfare lines are one of the few growth industries in this economy.

In absolute terms, median net worth decreased for all age groups over the period, but more so for older households than for younger ones. For householders 65 and older, it decreased from $195,890 to $170,128; for those under 35, the decrease was from $8,528 to $5,402. In percentage terms, however, the story was much different: a 37 percent decline for younger householders, compared with a 13 percent decline for older ones.

All educational groups also experienced declines. For example, those with a high school diploma saw their median net worth fall 39 percent and those with a bachelor’s degree experienced a 32 percent decline.

Other highlights (All dollar figures are in 2010 constant dollars):