Recall that after President Clinton spent his first two years in office raising taxes and then trying to get universal healthcare passed, the Democrats lost big in the 1994 mid-term elections. 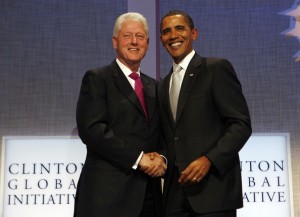 Clinton learned his lesson.  If he were to be re-elected in 1996 he would have to tack to the middle, and fast.  Enter advisor Dick Morris and the Clinton “tri-angulation” strategy that Clinton used in the years 1995 and 1996.  Suddenly Clinton positioned himself as the moderate between the liberals and conservatives in Congress.  Universal healthcare was out, budgetary restraint was in, and President Clinton even admitted to an audience in Houston that in 1993 he had raised taxes too much.

Before long, President Clinton was on a moderate roll:  in September 1996, Clinton signed both the Defense of Marriage Act, recognizing marriage as between one man and one woman, and an immigration law that streamlined deportation proceedings for illegal immigrants.

In July 1996, despite having vetoed similar measures twice before, Clinton signed into law the landmark welfare reform bill, mandating that welfare recipients either work or have an active job search before receiving government welfare.

In all of these issues, President Obama has taken the opposite positions in the run-up to his re-election contest this November.  Universal healthcare, known as “Obamacare”, has just passed constitutional muster thanks to the U.S. Supreme Court.  Annual deficits under President Obama have never been below $1 trillion a year, and are projected to stay at that level.  Instead of discussing tax cuts,  President Obama repeatedly proposes tax hikes,  recently on those families making $250,000 or more a year.

President Obama has gone from signaling that he will not defend Clinton’s Defense of Marriage Act to favoring same-sex marriage.  Earlier last month President Obama ordered the halt of deportations of certain illegal immigrants who had been brought to the US as children, by-passing legislation that had been stalled in Congress.

Recently the Environmental Protection Agency passed some coal regulations that will increase electricity prices for everyone and are predicted to shut down up to 30% of the coal-fired power plants in the industry, impacting swing states like Ohio and Pennsylvania.  The one energy bright spot in America right now is the “fracking” method of getting oil and natural gas out of the ground.  Whole areas of the country, from North Dakota to Ohio to Pennsylvania to New York, have become homes to boom-towns.  This is thanks to the new drillers who employ fracking technology.  The Obama approach to fracking: regulate it, of course!

After having been warned of a conservative-moderate backlash to his policies in the 2010 mid-term elections,  President Obama seems to be ever doubling-down on the same policies that have resulted in his popularity sliding in the first place.  Whereas President Clinton at this time in his election cycle was working to attract moderate and even some conservative voters, President Obama seems determined to strengthen his liberal-progressive credentials, shunning moderate and conservative voters.

At some point, the obvious question has to arise in the mind of those paying attention: assuming the United States still is a center-right country, is  President Obama aware of the fact that he is appealing to a narrower group of voters as the election approaches?  He has to know that these policies are not popular with the general public.

Just what is President Obama up to?  Could it be that there is some sense of a “swan-song” at work here?  In other words, could it be that part of President Obama’s thinking is that he has already accepted defeat, and that he wants to leave office with as little of his liberalism compromised as possible?

Regardless, President Obama is definitely not conforming his policies to the realities of a re-election contest.  I seriously doubt it, but only time will tell if this “un-Clinton” approach will win President Obama another four years.

Tom Thurlow is an attorney who practices law in the San Francisco Bay Area and manages the blog napawhinecountry.com.  He lives inNapaCountywith his wife Martina and daughter Rachel.