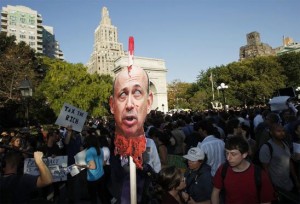 This Occupy Wall Street nonsense grew from the less politically correct Day of Rage that was being pushed earlier in the year. It became a “movement” and I use that term with great sarcasm, that is promoted and funded by the unions and those who have hijacked the Democrat Party. College students who aren’t happy with the bills that came due after they completed their clearly useless educations. Union members determined to drive the thug mentality. Democrat leaders, including our equally useless president, have embraced them.

And what are they calling for? Where here’s the text of some of the signs being waved by these so-called “disenfranchised Americans.”

“Queer teens, why talk to your parents? Kill them.”

“America failed as a society, because of the so-called Christians.”

There is a picture of a young man defecating on a police car. Others indulging in public sex as if they were little more than animals in the wild. Others screaming for the downfall of America. Yet even others blaming Wall Street, the banks, and corporate America for their debt. Even worse, some are hanging corporate America in effigy, and even others are carrying mock heads on sticks depicting the CEO of Bank of America.

Capitalism has not failed. People have. And that is a very important distinction that must be made. It means looking in the mirror and realize stupid and/or greedy decisions we’ve made that contributed to the downfall. It means looking at Congress, researching and studying the votes of those in office and then acting accordingly. Which, by the way, does not involve defecating on police cars or hanging people in effigy. And by the way, corporations can’t close tax loopholes. Only Congress can, so waving those signs at Wall Street will get you absolutely nothing.

And that brings me to my main point Is this what we’re fighting for? More specifically, Americans — the ones who still have a living brain cell — are fighting day and night to educate, inform, inspire, and motivate the citizenry to remember the greatness of America. To remember the sacrifices made in blood, sweat, tears and even life, to preserve this great nation. To realize the greatness of a republic form of government versus socialism or communism. And these are the people we’re supposed to turn America over to once we’ve pulled her back from the financial and constitutional precipice she is now teetering on?

Unlike the Tea Party, this Occupy Wall Street movement is a very small faction of society, and not a very admirable one. If they thought to mimic the Tea Party, they have failed miserably. For the Tea Party are hard-working, middle class Americans who have not only called for the halt of the wild spending in the government, but a return to a constitutionally-limited government. Members of the tea party can’t camp out in city parks for weeks on end because we have jobs to go to, families to take care of, responsibilities that we take seriously. Instead of vilifying the banks who accepted TARP, we took our business elsewhere. Instead of blaming corporations for utilizing the tax laws, we took the problem to the place where it began, Congress.

I’ll take the Tea Party over Occupy Wall Street any day of the week, and twice on Sunday.