About one baby is born every hour addicted to opiate drugs inthe United States, according to new research from University of Michigan physicians.

In the research published April 30 in the Journal of the American Medical Association, U-M physicians found that diagnosis of neonatal abstinence syndrome, a drug withdrawal syndrome among newborns, almost tripled between 2000 and 2009.

By 2009, the estimated number of newborns with the syndrome was 13,539 – or about one baby born each hour, according to the study that U-M researchers believe is the first to assess national trends in neonatal abstinence syndrome and mothers using opiate drugs. 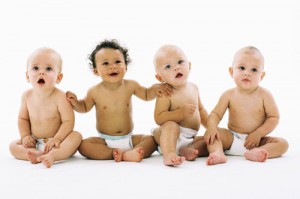 “Recently, the Centers for Disease Control and Prevention released a report which found that over the last decade sales for opiate pain relievers like OxyContin and Vicodin have quadrupled,” says Stephen W. Patrick, M.D., M.P.H., M.S., lead author of the study and a fellow in the University of Michigan’s Division of Neonatal-Perinatal Medicine.

“Although our study was not able to distinguish the exact opiate used during pregnancy, we do know that the overall use of this class of drugs grew by 5-fold over the last decade and this appears to correspond with much higher rates of withdrawal in their infants.”

Patrick, a Robert Wood Johnson Clinical Scholar at the University of Michigan, says multiple factors are likely to blame for the dramatic spike in use of opiate pain relievers, from their potential overuse for chronic pain to illegal sales of these drugs on the street. Overall, the U-M study showed that the number of mothers using opiate drugs increased five times over the last decade.

“Opiate use in our country is becoming an epidemic. Too often our health system reacts to problems; instead, we must address opiate use as a public health issue. To do this, we must limit opiate pain reliever use through healthcare provider education and statewide systems that watch for abuses, like people going to multiple doctors to get opiate prescriptions,” Patrick says.

Neonatal abstinence syndrome causes a wide array of symptoms including increased irritability, hypertonia, or heightened muscle tone, tremors, feeding intolerance, seizures, and respiratory distress. In addition, babies with the syndrome are more likely to be born with a low birthweight.

“You can often stand in the hallway and know which babies are experiencing withdrawal. They are irritable, their cries are different, and they appear uncomfortable,” Patrick says.

In Florida, where opiate pain reliever death now accounts for four times the number of deaths as illicit drugs, the number of newborns diagnosed with the syndrome has increase five-fold in the last six years. The Florida state House and Senate recently passed legislation to form a task force to evaluate the issue.

“Given that newborns with neonatal abstinence syndrome experience longer, often medically complex and costly initial hospitalizations, this study highlights the need for increased public health measures to reduce the number of babies exposed to opiate drugs,” says Matthew M. Davis, M.D., M.A.P.P., associate professor in the Child Health Evaluation and Research Unit at the U-M Medical School, and associate professor of Public Policy at the Gerald R. Ford School of Public Policy. Davis is senior author on the paper and co-director of the Robert Wood Johnson Clinical Scholar Program at U-M.

“We hope that state leaders will call for more research into the data we’ve provided because the majority of hospital expenditures for this condition are shouldered by state Medicaid programs.”

The study is being released early to coincide with its presentation at the Pediatric Academic Societies Annual Meeting.