Gannett Co., Inc. and Belo Corp. jointly announced today that they have entered into a definitive merger agreement under which Gannett will acquire all outstanding shares of Belo for $13.75 per share in cash, or approximately $1.5 billion, plus the assumption of $715 million in existing debt for an enterprise value of approximately $2.2 billion. The transaction, which has been unanimously approved by the boards of directors of both companies, represents a 28.1 percent premium to the closing price of Belo common stock on June 12, 2013.

The combination creates a broadcast “Super Group,” catapulting Gannett into the nation’s fourth-largest owner of major network affiliates reaching nearly a third of all U.S. households.  The acquisition nearly doubles Gannett’s current broadcast portfolio from 23 to 43 stations, including stations to be serviced by Gannett through shared services or similar sharing arrangements. Upon completion of the transaction, Gannett’s Broadcast segment will have greater geographic and revenue diversity, with 21 stations in the top 25 markets and will become the #1 CBS affiliate group, the #4 ABC affiliate group, and will expand its already #1 NBC affiliate group position. Following the transaction, Gannett’s Broadcast segment is expected to contribute more than half of the Company’s pro forma total EBITDA, and the Digital and Broadcast segments combined are expected to contribute nearly two-thirds. 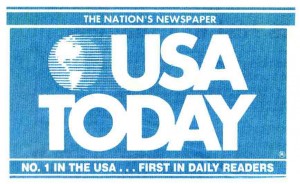 Gracia Martore, President and Chief Executive Officer of Gannett, said, “We are thrilled to bring together two highly respected media companies with rich histories of award-winning journalism, operational excellence and strong brand leadership.  We have been successfully transforming Gannett into a diversified multi-media company with broadcast, digital and publishing components across high-growth markets nationwide, and this is another important step in the process.  It will significantly improve our cash flow and financial strength, enabling us to quickly pay down debt while remaining committed to disciplined capital allocation.  By enhancing our portfolio with one of the largest, most geographically diverse and network-balanced TV station groups in the country, the new Gannett will be well positioned to lead innovation, bolster our existing growth initiatives and take advantage of new opportunities in the emerging digital media landscape.”

Commenting on the transaction, Dunia A. Shive, Belo’s President and Chief Executive Officer, said, “This is an outstanding and financially compelling transaction for our shareholders.  It is also a testament to the tremendous value our employees have created over Belo’s long history and to the strength of our brand in the media industry.  I am confident that we have found an excellent partner in Gannett – they are a leading media company that shares our commitment to the highest levels of journalistic integrity and embraces an active approach to community involvement.  Together, this portfolio of media assets will be well-positioned to capitalize on substantial growth opportunities in the years ahead.”