A hopeful sign that the economic recovery is gaining traction, PriceGrabber® just released the results of its first Back-to-School Shopping Forecast survey, revealing that nearly half (46 percent) of consumers are planning to spend more this back-to-school shopping season than in 2011. In comparison, only 13 percent of shoppers planned to spend more last year, and this data was reflected in an overall disappointing back-to-school season for retailers in 2011. Conducted from to May 22 to June 5, 2012, the survey includes responses from 4,450 U.S. online shopping consumers, with 1,509 of the respondents planning to shop this back-to-school season.

“From last year’s holiday shopping season through the middle of 2012, we have seen consumers starting to shop earlier surrounding major shopping seasons and holidays, and we expect this trend to continue this back-to-school shopping season,” stated Graham Jones, general manager of PriceGrabber. “While PriceGrabber survey data reveals that many consumers are planning to spend more money this back-to-school shopping season, a few are still hesitant about spending, leading shoppers to search for deals even earlier to take advantage of retailer incentives and discounts such as free shipping, coupons and sales.”

Most shoppers still plan to spread out their purchases

“Back-to-school shopping can quickly become expensive,” added Jones. “In today’s challenging economic climate, it’s important for families and students to save on back-to-school items.  Many consumers are harnessing the power of the Internet to find deals, compare prices, set price alerts, print coupons, and take advantage of online promotional codes and free shipping to save extra cash.” 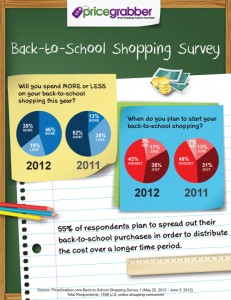