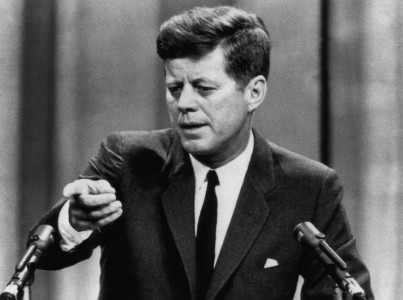 The John F. Kennedy Presidential Library and Foundation today announced the launch of AnIdeaLivesOn.org, an online tribute to President John F. Kennedy that aims to create a multigenerational conversation about the many ways in which the legacy of our nation’s 35th president lives on today.

Named for President Kennedy’s poignant observation that, “A man may die, nations may rise and fall, but an idea lives on,” the project invites the public to participate in the creation of an interactive documentary, putting a modern, human face on the enduring impact of John F. Kennedy. Stories from Congressman John Lewis, comedian Conan O’Brien, NASA astronaut Chris Cassidy, actor Martin Sheen, House Leader Nancy Pelosi, Los Angeles Mayor Eric Garcetti, journalist Luke Russert, and inaugural poet Richard Blanco will be introduced on the site throughout the week leading up to November 22, 2013.

“During a time when so much of the conversation is looking back at that tragic day in Dallas, we are excited to bring together voices from people around the world who continue to be inspired by President Kennedy fifty years later,” said Tom McNaught, Executive Director of the John F. Kennedy Library Foundation. “In celebrating public service, peaceful diplomacy, the arts, civil rights, responsible citizenship, and the exploration of new frontiers, we honor the best in President Kennedy and ourselves.”

The Kennedy Library Foundation partnered with The Martin Agency and Tool of North America to create An Idea Lives On. The site is populated with personal stories in many forms: video, audio, text, photographs and tweets. The public is invited to submit content to www.AnIdeaLivesOn.org, where the Library will curate submissions and spotlight the most compelling stories. Submissions are also invited through social media, using the hashtag #AnIdeaLivesOn. The site will remain open for submissions through 2013 and beyond.

An Idea Lives On is a film, but can be interrupted and explored like a website. The individual stories will be assigned to a category of JFK’s legacy, including volunteerism, the space program, arts and humanities, civil rights, immigration, fashion, politics, education, religion and the countless buildings, monuments, streets, schools and programs named after Kennedy. The user can decide what to watch and in what order, and each specific story is shareable via social media.

Specific content currently on the site at launch includes: Richard Blanco, the 2013 inaugural poet, speaking about the arts and his connection to Kennedy and Robert Frost; Michael Dukakis, discussing JFK’s legacy of public service and how it is still evident today; and two young people named after JFK reflecting on the impact of carrying his name and how a president they never knew inspires them today. In addition, roads, buildings and plazas bearing Kennedy’s name, as well as famous quotes and speeches, have been reinterpreted by contemporary artists and are featured throughout the piece.

“Our 19-year relationship with the JFK Library has been one of the longest and most rewarding of my career,” said Joe Alexander, chief creative officer at The Martin Agency.“ In the past few years, we’ve gone to the moon together — http://wechoosethemoon.org/. We’ve revisited the lessons learned during the Cuban Missile Crisis — http://cloudsovercuba.com/. Now, when others are remembering the circumstances around Kennedy’s assassination, we’re highlighting the ways he lives on.”