Texas longest serving governor, Rick Perry (R-TX), announced today that he won’t be seeking another term in that office.  He did not speculate about a run for the White House in 2016. However, considering his debacle in 2012, that seems unlikely to most political pundits.

The biggest beneficiary of Perry’s announcement may be his Lt. Governor, David Dewhurst who has been in a state of limbo since being solidly defeated by the upstart Ted Cruz in a bid for US Senate.  Outspent many times by Dewhurst, who is one of the richest elected officials in the country, Cruz easily defeated one of the state’s senior politicians (and considered unbeatable by many) in a runoff for the Senate seat.  Meanwhile, in November, Cruz won by one of the biggest margins of any race in the country.  Since that huge defeat for Dewhurst, other politicians have seen the Lieutenant Governor as very vulnerable.  Dewhurst has always been seen as moderately conservative by many and after being defeated by Cruz, as an “establishment Republican.”  Longtime Texas Land Commissioner Jerry Patterson, who has a following that is similar to Cruz as a passionate conservative, came to believe that Dewhurst can be beat and decided to announce his intentions to go after that seat. 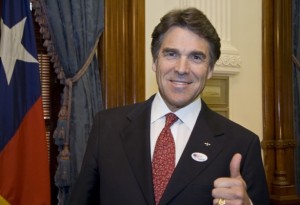 Others have challenged Dewhurst as well. With Perry’s announcement, Dewhurst was quick to respond, saying “”It has been an honor to work with my friend, Governor Rick Perry, in creating the most conservative state in America. In his final 18 months as Governor we will continue to work closely together to make Texas even stronger. His legacy of principled, conservative leadership will have a lasting impact on the Lone Star State, protecting freedom and expanding opportunity for all.”  In addition to being an honor, it may provide a vacant spot for Dewhurst to pursue or maybe make some of his primary opponents consider running for that office.  In addition to Patterson, state Senator Dan Patrick of Houston and Agriculture Commissioner Todd Staples have been in the hunt for Dewhurst’s job.

The following is Perry’s statement today in its entirety, you can check out the introduction video here:

Thank you. I am delighted to be joined today by my wife, Anita, my children Sydney, Griffin and his lovely wife Meredith, and especially our precious little granddaughter Ella Gray, who was born just a couple weeks ago.

It’s good to be joined by my extended family of staff and former staff, there must be hundreds of you here today. And it is great to see so many supporters who have made the high honor of public service possible.

It has been an improbable journey that has taken me from a farm in a place called Paint Creek to the Texas Governor’s Office. Each day has been an honor, serving the most dynamic, optimistic and independent people on the face of the earth.

We have created the strongest economy in the nation. We have balanced budgets while prioritizing critical infrastructure, including water, roads and public schools, all to encourage economic growth.

We have passed sweeping lawsuit reforms that allowed thousands of doctors to improve access to health care. Our civil justice reforms have protected jobs and investment, ensuring the courthouse is reserved for legitimate disputes.

Working with legislative leaders, I have proudly signed seven balanced state budgets, cutting spending in lean times, and investing more in necessary services when our economy was strongest. We have stopped all major tax hikes, and kept the overall Texas tax burden among the lowest in the country.

We have stood strong against unwise policies from Washington that would bust the bank, policies that come with strings attached, and a large cost down the road, things like an unwise expansion of unemployment insurance, or an unsustainable expansion of the Medicaid program.

In the most recent session, we made a historic investment in preserving and protecting our water supply that will pay dividends for decades to come. It’s now up to voters to approve.

We have also invested in groundbreaking research at our universities, and championed reforms to make them stronger, more affordable and more accessible for all students.

Through the creation of the Emerging Technology Fund, we have planted seed capital for Texas entrepreneurs, innovators and universities to boost ideas and innovations that are changing the world. I am especially proud that our investments attracted major federal research funding to develop vaccines at Texas A&M University, to respond to major outbreaks of new strains of the flu, or acts of bio-terrorism.

The Brazos Valley is already being transformed into a biotech-corridor that is luring major pharmaceutical investment and will be home to thousands of new jobs.

We have better protected the right to life for Texas children and families, protected the sanctity of marriage, and respected the traditional values that made Texas the greatest state in the greatest nation on earth. We Texans are not afraid to fight for what we believe in.

My conservative philosophy and policies have frequently made government agencies, special interests and even some legislators uncomfortable. But that’s exactly what Texas needs to succeed, innovate and stay ahead of the competition.

Most of all, I am proud of what we have done together to create jobs and opportunity in Texas.1.6 million jobs have been created in Texas since I became governor, with 30 percent of the net new jobs created in America over the last decade created right here in Texas.

This is a tribute to the entrepreneurial spirit of Texans. It’s the private sector that creates wealth and jobs, the public sector can only create the right environment to make this possible. This, in my opinion, is where we have done our best work. Texas is the new frontier for opportunity and innovation in America today. Our communities are thriving with opportunity, cultural attractions and a tremendous quality of life. Today, Texas is better positioned to take advantage of the opportunities of the 21st Century than any other state.

We have been ranked the best business climate nine years running, and we’ve led the nation in exports for the last decade.

All along the way, I have been guided by a simple philosophy: the best way to fund education and healthcare is through job creation, not higher taxation.

Texas works. The jobs prove it. The revenue picture proves it. The number of people moving here proves it. And that hasn’t happened by accident.

Texas works because we have less government, less spending, fair regulations, and lower taxes. We have built a pathway to prosperity through innovation and ingenuity.

And from the book of Darrell Royal: “Dance with the one who brung ya.”

I remain excited about the future, and the challenges ahead, but the time has come to pass on the mantle of leadership.

Today I am announcing I will not seek re-election as governor of Texas.

I will spend the next 18 months working to create more Texas jobs, opportunity and innovation. I will work to actively lead this great state. And I will also pray, reflect and work to determine my own future path.

I make this announcement with a deep sense of humility and appreciation for the time and trust the people of this state have given me, and knowing I will truly miss serving in this capacity, the greatest job in modern politics.

None of this would have been possible without the love and support of two great parents, who raised me right in a humble home in Paint Creek, Texas. Or the love of my life, my wife Anita, who has blessed me with two incredible children. She has been a fantastic first lady of Texas, shining a light on important causes for our great state.

In our time together, we have made the most of this unique opportunity to shape the future of Texas. I make this decision as a man forever moved by the people I’ve met, the sacrifices I’ve witnessed and the perseverance of the Texas spirit.

I will cherish specific moments in time, such as visiting shelters set up for the victims of Hurricanes Katrina and Ike, as Texas showed the nation we are a people rich with compassion.

I will always remember people like Heather Burcham, who touched my heart in the last few months she had left before she succumbed to cervical cancer.

I will think of the heroes we lost in the Texas sky when the Space Shuttle Columbia disintegrated upon re-entry. I’ll continue to be moved by the day Wallace Jefferson took the oath of office as our first African-American Supreme Court Justice, the descendent of a man sold as a slave on the steps of a Central Texas Court House, who now is the chief justice of our highest civil court.

I will think of all the military heroes I have met over the years, individuals like Marcus Luttrell and Dan Moran, as well as the hundreds of families I have called who were grieving the loss of a loved one who died on the field of battle.

In moments of tragedy and triumph, I truly saw the best of what Texas has to offer. We are home to a unique people with limitless inspiration and perseverance.

To lead this state for the first part of the 21st Century has been nothing less than extraordinary. No other state can match what we’ve accomplished together. Today, Texas is the envy of the nation

I am looking forward…to the next 18 months, as I serve out my term. Any future considerations I will announce in due time, as I arrive at any decisions. But my focus will remain on Texas. Public service is a sacred trust. I am grateful for the privilege that Texans have allowed me. Until I leave this office, I will continue working hard to do what’s best for Texas.

That includes this special session, and additional sessions if needed, improving transportation infrastructure, passing juvenile justice reform, and protecting the right to life for the youngest and most vulnerable Texans. Texas is and will remain a strong pro-life, pro-family and pro-freedom state.

After January 2015, new chapters will be written, new leaders will help write them, but the focus must remain on the greatest state in the union, and opportunity for Her people. I want to close with the words of Peter Drucker, who said, “Rank does not confer privilege or give power. It imposes responsibility.” Our responsibility remains to the next generation of Texans, who will inherit a state of our making. We alone are responsible for the kind of Texas that will greet them.

It is my hope that tomorrow’s leaders build on our legacy of opportunity so Texans born into any circumstance can have a chance to experience the American Dream.

Thank you, God bless you, and may God bless this Texas we love.