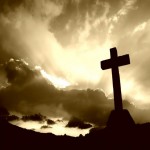 I am a Christian.  I am proud to be one and will shout it to the roof tops any chance I get.  However, I really need to express my disgust when people throw Jesus around to try and guilt people into taking up their cause.

Jesus taught us about charity.  He taught us not to judge.  He taught us what love is.  Nevertheless, Jesus also taught, that if you want something, if you want to get out of your situation, whether it be living in sin, in sickness or in poverty, it was you who were going to have to take the steps to make it happen.

For the woman at the well, you know the woman who had many husbands and at the time was living with another man, he told her He knew her sins, He did not judge her but told her to sin no more.

For the man at the well at Bethesda, you know the one who could not get to the well because he couldn’t walk and no one would help him, Jesus asked the man if he wanted to be healed and told him to get up and walk.

Jesus taught us that we would always have the poor with us.  Therefore, in saying that, yes, we should bless others but God did not teach us that the rich have to give everything and the poor nothing.  In Exodus 30:15 God said that the rich should give no less and the poor no more than 5 shekels.  He said the rest was up to the giver to do what the spirit led them to give.

I am not heartless and I do feel empathy for those who are homeless and or jobless, however how is living on the street or in tents in public parks helping yourself find a job?  It is not the city or government’s responsibility to make sure you have a place to live, that is what the Salvation Army and other charitable services are for.  Why don’t they have jobs?  Is it they don’t want to work at a fast food restaurant, be a greeter at Wal-Mart, be a sacker at the grocery store, or pick up garbage on the side of the road?

Do these jobs offer lots of money?  I would say no, but they are a start.  Stay at the Salvation Army where you can get a meal and shower so you can go to an interview.  You just hanging out, in no way helps you move forward.  Would someone want to hire an employee, who looks dirty, or smells, or looks like they just rolled out of bed?

Yes, Jesus taught us to be charitable but he also told us that life was full of obstacles and it was up to us to have faith and move forward.  He told us not to depend on the kindness of others or a job.  We are to believe in Him, cast our cares on Him and go out and do something with our lives.

Jesus did not use those who had it “all together” he used the blemished.  The bible also tells us that He gives US the power to be prosperous.  He gives us the ability to do many and great things.  So use the gifts that God gave you.

Moreover, for those who like to play the Jesus/Christianity card to diminish the arguments of those who don’t believe the same as you, I would say – stop.  Don’t judge the heart of someone who may not be as “generous” as you think you are.  You don’t know what God has put on their heart.

For some reason the poor these days are a hot button issue.  Liberals are claiming conservatives want the poor to stay poor and Christians are judging other Christians as to the extent of their Christianity in the service of the poor.

I look at it this way; we each have had or will have obstacles in our lives.  It is how we deal with them that put us where we will be.  If you want to have a job then go look for one.  Once you have one make a plan to save a little bit at a time and find a place to live.  Will the job or the place you live fall in your lap, NO!  You are going to have to make it happen.  Day in and day out, until it does.  There was a time when I ate soup for every meal – if I ate, I used dishwashing liquid to wash my hair and wore layered clothes and blankets in my rented house because it cost too much to turn the heat on.  But I did it and I worked harder and was blessed with a small raise when I asked for it.  I didn’t complain about how little I made, I worked longer and harder and they in turn gave.

And for those of you who proclaim yourselves to be more Christian and charitable than others … are you taking food, offering a place to stay, offering a job to the less fortunate or are you blaming the city or government and other Christians for their lack of inactivity?   Hmmm…