By US Post Office, Special for US Daily Review Staff.

Four extraordinary film directors — Frank Capra, John Ford, John Huston and Billy Wilder — received a stamping ovation today with the issuance of the Great Film Directors First-Class Forever stamps. The dedication took place at the American Film Institute Silver Theatre and Cultural Center where some of their works were showcased. Available nationwide today, the stamps can be purchased online at usps.com/shop, by calling 1-800-STAMP-24 (1-800-782-6724) or by visiting Post Offices. 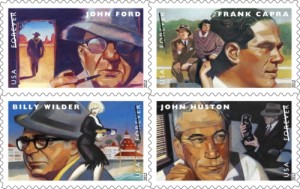 “With these stamps, we’re bringing these filmmakers out from behind their cameras and putting them in the spotlight so that we can learn more about them,” said Samuel Pulcrano, U.S. Postal Service vice president, Corporate Communications in dedicating the stamps. “Movies offer a window into our history and heritage and tell the story of America. Similar to movies, stamps honor our past and celebrate our achievements while encouraging us to learn more about the people, places, and ideas that shape the American experience.”

“The American Film Institute’s mission is to preserve and showcase the cinematic treasures created by these and other directors and it is our hope that these Forever stamps will encourage Americans to see their classic movies that gave us a mirror on our country’s character and values,” said Firstenberg.

Following the ceremony, AFI Silver Theatre provided the audience with a screening of Billy Wilder’s The Apartment.

The four filmmakers received multiple Academy Award nominations, 15 Oscars, and numerous other honors during their lifetimes. But their greatest accomplishment lies in the vitality and artistry of the stories they told through film. Over a period of approximately 40 years, the quintessentially American filmmakers­ captured multiple contradictions, tensions, dark and light sides in deeply personal interpretations that conveyed the American experience as never before.

The stamp art combines a portrait of each director with a scene from one of his most iconic works. The background art for the stamp honoring Frank Capra shows a scene from It Happened One Night, a comedy in which a runaway heiress (played by Claudette Colbert) and a reporter (Clark Gable) compare their hitchhiking skills.

For the John Ford stamp, the background recalls a scene from The Searchers, an influential Western starring John Wayne and making Ford’s characteristic use of the American landscape.

The Maltese Falcon inspired the background art for the John Huston stamp. In this classic mystery, gumshoe Sam Spade (Humphrey Bogart) goes up against various unscrupulous characters (among them Mary Astor, Peter Lorre, and Sydney Greenstreet).

For Billy Wilder, the stamp background artwork was inspired by Some Like It Hot, a farce about two male musicians (Jack Lemmon and Tony Curtis) who seek refuge from gangsters by posing as members of an all-girl band featuring luscious singer Sugar Kane (Marilyn Monroe).

Customers may view the Great Film Directors Forever stamps, as well as many of this year’s other stamps, on Facebook at facebook.com/USPSStamps, through Twitter @USPSstamps or on the website Beyond the Perf at beyondtheperf.com/2012-preview. Beyond the Perf is the Postal Service’s online site for background on upcoming stamp subjects, first-day-of-issue events and other philatelic news.

How to Order the First-Day-of-Issue Postmark
Customers have 60 days to obtain the first-day-of-issue postmark by mail. They may purchase new stamps at a local Post Office, at The Postal Store website at usps.com/shop or by calling 800-STAMP-24. They should affix the stamps to envelopes of their choice, address the envelopes to themselves or others and place them in larger envelopes addressed to:

After applying the first-day-of-issue postmark, the Postal Service will return the envelopes by mail. There is no charge for the postmark. All orders must be postmarked by July 23, 2012.

How to Order First-Day Covers
The Postal Service also offers first-day covers for new stamp issues and Postal Service stationery items postmarked with the official first-day-of-issue cancellation. Each item has an individual catalog number and is offered in the quarterly USA Philatelic Catalog, online at usps.com/shop or by calling 800-782-6724. Customers may request a free catalog by calling 800-782-6724 or writing to:

Philatelic Products
There are five philatelic products available for this stamp issue: