Mark Fortier:  Why should we not dismiss luck as a mere superstition?

TM & LB:  Luck is a fundamental part of how the world works! 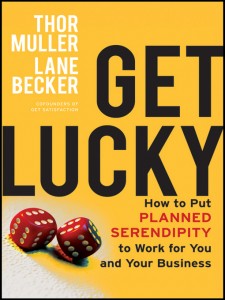 Open any history book and you’ll find stories of curious people looking for one thing and finding another. Whether it’s Columbus running into the New World or Tim Berners-Lee setting out to create a document sharing system for physicists and inadvertently inventing the World Wide Web, the world we live in was built on top of serendipitous occurrences.

Accidents happen—there’s nothing mystical about them—but it’s our practical ability to cultivate and take advantage of the best accidents that transforms these from forgettable moments into incredible opportunities. This is the essence of planned serendipity, the kind of luck you make for yourself.
MF:  What is “planned serendipity”? Why is it important to learn these skills now?

TM & LB: “Planned serendipity” is the only way to succeed in our fast-changing world, where so much of what we need is out of our control.

Most planning focuses on fostering predictability and reducing risk, but this kind of planning often leads us to focus so intently on what we already know and can predict that we’re likely to miss out on all the chance opportunities that appear along the way. Moreover, our ability to make definitive plans is largely an illusion. Too much is unknown at the beginning, and only becomes clear as part of the process.

Admitting this isn’t admitting failure—it’s simply acknowledging a fundamental truth about this large, complex, information-saturated world we now live in. And it doesn’t mean we can’t plan successfully—we just need a new set of tools to help us plan for the seemingly unplannable! “Planned Serendipity” is just this: eight skills that allow us to make plan in a way that allows for predictability while still opening ourselves up to all the opportunities that appear along the way.
MF:  Who can use your planned serendipity approach? What’s an example of a company that is successfully using “planned serendipity”?

TM & LB: Here’s a little secret: Every successful person on this planet already employs the skills of planned serendipity. No one succeeds without an assist from the unexpected. Even Sergey Brin, one of the cofounders of Google, when asked about the secret of Google’s meteoric rise, replied that “The number one factor that contributed to our success was luck.’’

Brin wasn’t saying this in order to dismiss his (significant!) accomplishments. Instead, he was sharing a crucial insight: For something to succeed with the scale and speed that Google did, it required more to happen than any one person can fully take credit for—even someone as clearly talented as Sergey Brin.

What Brin can take credit for is being open to serendipity, and being willing to use it to his advantage. He combined a passion for his work, a commitment to his organization’s purpose, and a willingness to do whatever it took to find the best way to put them to work in the world—all part of the skills of planned serendipity.

MF: How can I introduce serendipity into my business and life? What is the first step someone should take if they want to start harnessing luck?

TM & LB: Break out of your routine! Routine is the enemy of serendipity. Doing the same thing day in and day out almost guarantees that you won’t run into anything new. In order to take advantage of unexpected surprises you have to put yourself in a position to actually encounter the unexpected in the first place.

We call this the skill of “motion”—putting yourself in unfamiliar situations, but within familiar environments, in order to engage with previously unfamiliar people and ideas that are connected to your job, your projects, or your interests.

Visiting with a different department inside your organization, attending a conference in an area related to your job, or even picking a different place to sit for lunch in the cafeteria each day – these are all examples of motion in the workplace. By looking for relevant experiences that are outside of your normal activities you’re giving new people, opportunities, and information the chance to find you.

TM & LB: “The double bind” is a term used by psychologists to describe a scenario where an authority makes two demands, one of which contradicts the other. Whichever instruction the victim follows, the other instruction becomes impossible.

The double bind is the enemy of serendipity. Most companies, structured to deliver predictability and reduce risk, squelch the role of chance inside their operations, whether through quarterly revenue commitments, management by objectives, value chain engineering, or a thousand other things. Add into this mix a mandate to foster serendipity, to be creative in ways that require acknowledging that not everything can be predicted in advance, and we find ourselves ensnared in it.

The only way to untie a double bind is to change the basic rules under which we function, replacing the logic that created the dilemma in the first place with a new way of thinking that resolves the conflict. Planned serendipity serves just this purpose for us, by giving us a new way to think about planning that supports predictability and chance opportunity at the same time.

MF:  How did you come to write on this topic?

TM & LB: In 2007, we founded Get Satisfaction, a community platform that lets companies participate in an ongoing online conversation with their customers. At Get Satisfaction, we were in the remarkable position of getting to witness the practices that power the most innovative companies in the world, including Procter & Gamble, Facebook, and Wal-Mart.

Working with these companies taught us that “getting lucky” wasn’t something that just happened to these businesses—instead, it was the result of a particular mindset, a set of specific behaviors, and a willingness to do the hard work of turning unexpected insight into meaningful action. Several years, some hard work, and a few unexpectedly serendipitous occurrences later, we found ourselves on the path to writing this book!

Thor Muller and Lane Becker are co-founders of several companies including Get Satisfaction, a platform for creating customer communities that bring people together around products and brands they care about. They live in San Francisco.