“While President Obama ‘condemns the violence in Egypt’, his Administration continues to send billions of taxpayer dollars to help pay for it. The law is very clear when a coup d’état takes place, foreign aid must stop, regardless of the circumstances. With more than 500 dead and thousands more injured this week alone, chaos only continues to grow in Egypt. So Mr. President, stop skirting the issue, follow the law, and cancel all foreign aid to Egypt.” 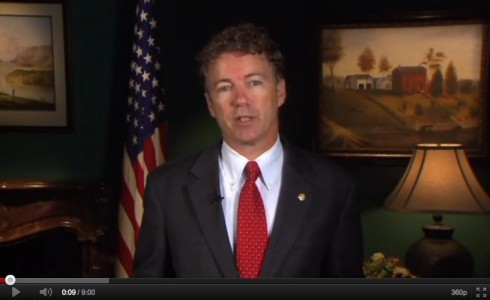 On July 31, 2013, the Senate voted on Senator Paul’s Egypt amendment to S. 1243, the Transportation, Housing and Urban Development appropriations bill. Amendment No. 1739 would have stopped military foreign assistance to Egypt by enforcing current law that the Obama Administration is violating, which prohibits the United States from providing foreign assistance to nations that experience a military coups d’état. That money would have been redirected to the “Bridges in Critical Corridors” fund in S.1243. The Paul Amendment, however, was tabled. Click HERE to read the text of the Paul Amendment No. 1739 in its entirety.

During the debate, Senator Paul argued the following:

“The law is very clear. Everyone here in Congress can read. They recognize, they recognize that the law says when there is a military coup, the aid must end. Today we will vote on whether or not they will obey the law or whether they will openly flout the law and disobey. When a military coup overturns a democratically elected government, all military aid must end. That’s the law. There is no presidential waiver.  The law states unequivocally that the aid must end. So when the military coup occurred in Egypt, how did the President respond? How did Congress respond? The President and his cohorts in Congress responded by shoveling good money after bad into the failed state of Egypt. The President is intent on building nations abroad and not taking care of our nation here at home.”