New York, New York: The rare first newspaper printing of the Declaration of Independence will be auctioned in New York City at Robert A. Siegel Galleries’ (http://www.siegelauctions.com) 50th annual Rarities of the World sale on June 25th. It is being offered in collaboration with Seth Kaller (http://www.sethkaller.com), a leading expert in the acquisition, authentication and appraisal of American historic documents and artifacts. The Declaration being sold was printed in Benjamin Towne’s Saturday July 6, 1776 issue of The Pennsylvania Evening Post. It is the first newspaper printing of the Declaration, and its second printing in any form. According to Mr. Kaller, it is also the first publication of the Declaration to closely follow Thomas Jefferson’s style. 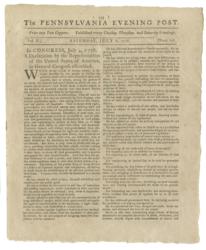 This newspaper publication of the Declaration was preceded only by the official broadside (a single page with text on one side) published by John Dunlap on July 5. (Towne beat Dunlap’s own newspaper, The Pennsylvania Packet, by two days). Says Kaller, “We discovered something significant while researching the first two Declaration publications. Our evidence about the differences is spelled out in the catalog. The most intriguing upshot of showing that the Post follows Thomas Jefferson’s style, while the Dunlap follows John Adams’s style, is that this may mean that there were two different July 4, 1776 original manuscripts of the Declaration.”

When most Americans picture the Declaration, they envision the engrossed manuscript signed by John Hancock and 55 others, titled “The unanimous Declaration of the thirteen United States of America.” But what they are seeing is a document that was not written or signed in July 1776. When the delegates agreed to the final text of the Declaration on July 4th, New York abstained. As seen in this newspaper, the original heading was “A Declaration by the Representatives of the United States of America, in General Congress assembled.” The Declaration was then signed on July 4th only by John Hancock and Continental Congress secretary Charles Thomson, and sent to press. The heading was changed later in July once New York added its assent, and on August 2, members of Congress met and signed the engrossed copy of the Declaration. Unlike the July 6 printing offered at Siegel, the engrossed Declaration did not become familiar to Americans until decades later.

“The Pennsylvania Evening Post reflects the experience of everyday Americans as they read news of independence for the first time during that momentous July of 1776. Thus, the document we are auctioning is in a way even more ‘original’ than the National Archives’ signed manuscript, which was created the next month for posterity rather than as a means of announcing America’s independence to the world. The Post’s printing was distributed far and wide, even by the members of the Continental Congress,” explains Kaller.

“Declaration issues of The Pennsylvania Evening Post are rare. This is one of only four copies we have found recorded on the market in at least the last 50 years, three of which we’ve had the privilege of selling,” adds Kaller.

The newspaper printing of the Declaration of Independence is expected to sell for $500,000 – $750,000 (plus 15% auction buyer’s fee). The auction will take place at Robert A. Siegel Auction Galleries, 60 East 56th St. in NYC (http://www.siegelauctions.com), June 25th at 1:00 PM. Kaller first collaborated with Siegel for their 2012 Rarities auction, selling a rare copy of the Emancipation Proclamation, which fetched $2,085,000.

About Seth Kaller, Inc. – Seth Kaller is a leading expert in acquiring, authenticating and appraising American historic documents and artifacts. Kaller has built museum-quality collections for individuals and institutions, as well as legacy collections for philanthropists to donate. He has handled important manuscripts and documents relating to the Declaration, the U.S. Constitution, and all U.S. presidents, as well as many other of the world’s leading historical figures. Seth Kaller, Inc. is located in White Plains, NY.

About Robert A Siegel Auction Galleries, Inc. Siegel has been conducting stamp auctions continuously since 1930. The firm is recognized around the world as the leading auctioneer of stamps and postal history in the United States.