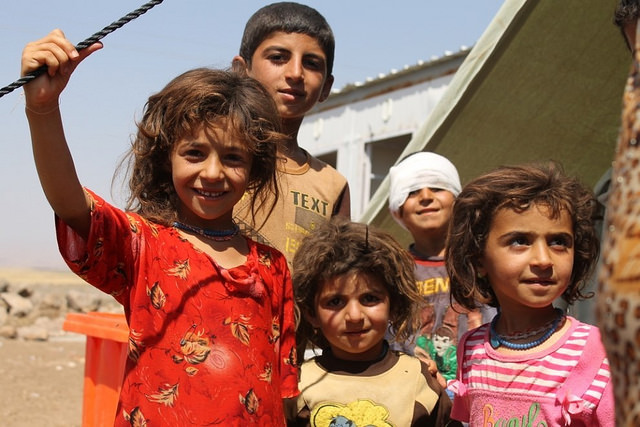 Food for the Hungry (FH) is giving shelter and other relief support to Iraqi Christian families and Syrians escaping violence from the terrorist group, Islamic State in Iraq and Syria (ISIS). With international news coverage of ISIS beheading Christians in Iraq and many surrounding countries closing borders, Iraqi families are arriving in Lebanon—a country already taxed with Syrian refugees—in desperate need.

Others are remaining in their country trying to seek safety.

FH is partnering with Lebanese Society for Educational and Social Development (LSESD) to help Iraqi Christians and Syrians fleeing violence to find safety and shelter in their own countries and in Lebanon.

“As ISIS controls further territory in Iraq, more than 1,500 Iraqi Christian families have sought refuge in Lebanon, and we are expecting more Iraqis to arrive,” staff reported.

Additionally, FH and LSESD are helping Christians and churches in northern Iraq positioned on the front line of suffering. FH and the LSESD are currently providing shelter, food, education and other help to approximately 7,000 Syrian families in Lebanon and Syria each month. As Iraqi Christian families arrive, LSESD is providing aid, but needs financial support for continuing to meet the numbers of people who need help.

“We have been called to provide for Christian Iraqi refugees in Lebanon, and we expect to have a growth in Iraqi refugees in the coming months,” says staff. “We do not know how we will be able to upscale our relief and aid program yet.”

FH is raising funds and releasing the I Am Your Voice campaign on September 3, 2014, to increase awareness and funding for helping LSESD get resources to serve these Iraqi Christian families and Syrian refugees.

Founded in 1971, Food for the Hungry provides emergency relief and long-term development programs with operations in more than 20 countries to help the world’s most vulnerable people.