Seventy-five years ago, on July 4, 1939, Lou Gehrig delivered what is now known as sports’ most famous speech. Suffering from the symptoms of amyotrophic lateral sclerosis (ALS), he died less than two years later at the age of 37. Today, Gehrig remains an inspiration, representing fortitude, humility and courage to the tens of thousands of Americans living with Lou Gehrig’s Disease.
During this special anniversary year, beginning in May, ALS Awareness Month, and culminating in July, The ALS Association will be honoring Gehrig’s legacy in a nationwide campaign to raise money for cutting-edge research to find treatments and a cure for the cruel disease that now bears his name. To learn more about Gehrig and the state of ALS research visit www.ALSA.org/75. 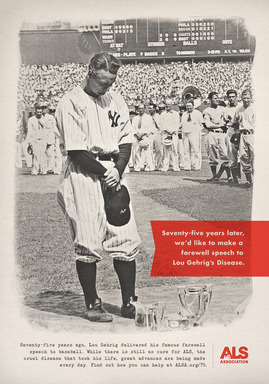 “Fans, for the past two weeks you have been reading about the bad break I got. Yet today I consider myself the luckiest man on the face of this earth,” were Lou Gehrig’s words on July 4, 1939 at Yankee Stadium. As teammates, fans, friends and family looked on and wept, he concluded his speech that day with the memorable words: “I might have had a bad break, but I’ve got an awful lot to live for.”

ALS is a progressive neurodegenerative disease that affects nerve cells in the brain and the spinal cord. Eventually, people with ALS lose the ability to initiate and control muscle movement, which often leads to total paralysis and death within two to five years of diagnosis. For unknown reasons, veterans are approximately twice as likely to develop ALS as the general population.

“While Gehrig was the first face of ALS, this ALS Awareness Month we want to not only honor his legacy but also recognize the thousands of individuals that are currently impacted by the disease. Raising awareness is a crucial step in generating support for our efforts to find treatments and a cure for today’s faces of ALS,” said Jane H. Gilbert, President and CEO of The ALS Association. 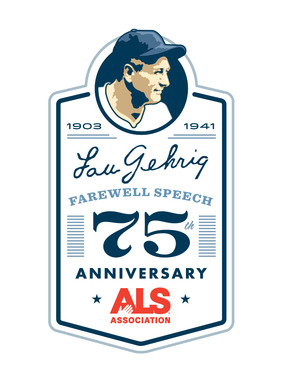 Visitors to www.ALSA.org/75 can learn more about Lou Gehrig, ALS and the latest groundbreaking research. They can also read stories of those impacted by the disease or make a donation to support research projects led by the world’s top ALS scientists. 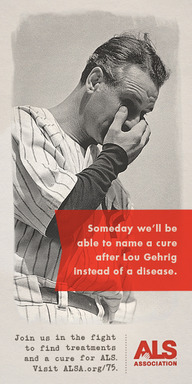 “Sadly, the outcome of a diagnosis of ALS today isn’t much different than it was in Gehrig’s time. Seventy-five years later, there is still no cure, and only one drug approved by the U.S. Food and Drug Administration (FDA) modestly extends survival by two or three months,” continued Gilbert.

But there is much to be hopeful for right now as there have beensignificant advances in ALS research during the last several years. Additionally, there have been major changes in the pharmaceutical industry and the drug development landscape.

“The severity of ALS, the absence of effective therapy, and the importance of finding treatments for all neurodegenerative diseases, have combined to make ALS an attractive target for new approaches to drug discovery and development,” said Lucie Bruijn, Ph.D., MBA, Chief Scientist for The ALS Association.

The Association’s Translational Research Advancing Therapies for ALS (TREAT ALS™) program actively funds all phases of ALS research. Inherent in the name of this program is its goal to “translate” research findings as quickly as possible into meaningful treatments and ultimately a cure for the disease. Participation in clinical trials is paramount to the success of these studies. Until that cure is found, The ALS Association and its network of 38 chapters nationwide work directly with people living with the disease, their families and caregivers to help improve an individual’s quality of life and manage the impact of the disease.

The principle on which The Association’s research program is based is “collaboration.” Rather than conducting its own research in a proprietary lab, The Association’s unique approach to advancing ALS research involves forging partnerships among investigators, government officials, pharmaceutical and biotech companies, academic institutions, and other individuals and industry leaders.

“Through the generosity of our donors, The Association invests in projects that we, along with a panel of the world’s preeminent doctors and scientists, deem to have the highest degree of scientific merit and relevance to ALS. Presently, The Association is funding 98 active projects with a total award value of $18.1 million,” Bruijn continued. “There has never been a more exciting time for ALS research—but it’s crucial that we raise money to support the most promising research happening right now all over the globe.”

The ALS Association is thankful for the support of its corporate donors who have contributed to the campaign to raise money for ALS research during ALS Awareness Month and through July, in honor of the 75th anniversary of Lou Gehrig’s famous farewell speech:

HISTORY®
HISTORY®, has produced a :60 second PSA about Lou Gehrig that will air on A+E Networks and will be distributed through its cable providers.

HISTORY®, now reaching more than 98 million homes, is the leading destination for award-winning original series and specials that connect viewers with history in an informative, immersive and entertaining manner across all platforms. The network’s all-original programming slate, including scripted event programming, features a roster of hit series including American Pickers®, American Restoration™, and Pawn Stars®, as well as HISTORY®’s epic miniseries and special programming such as Men Who Built America, Gettysburg, Vietnam in HD, and America The Story of Us®. The HISTORY® website is the leading online resource for all things history www.history.com.

Pride Mobility/Quantum Rehab
The company is sponsoring our e-campaign in the month of May and has donated 10 lift chairs to be given to ALS Association chapters to give to people impacted by ALS to improve quality of life.

Quantum Rehab®, a division of Pride Mobility Products®Corporation, designs and manufactures complex rehabilitation solutions for individuals with comprehensive mobility needs. Quantum Rehab’s headquarters are located in Northeastern Pennsylvania. As part of the complex rehab community, Quantum, with its inspired employees, places an emphasis on active participation and is recognized by such national organizations as The ALS Association and for its involvement and philanthropic efforts.

Cytokinetics
Cytokinetics is supporting our e-campaign in the month of July and is sponsoring a commemorative Lou Gehrig anniversary poster.

Cytokinetics is a clinical-stage biopharmaceutical company focused on the discovery and development of novel small molecule therapeutics that modulate muscle function for the potential treatment of serious diseases and medical conditions. Cytokinetics is developing tirasemtiv, a fast skeletal muscle activator, as a potential treatment for diseases and medical conditions associated with neuromuscular dysfunction. Tirasemtiv is currently the subject of a Phase II clinical trials program which includes BENEFIT-ALS, a recently completed Phase IIb clinical trial of tirasemtiv in patients with ALS. Tirasemtiv has been granted orphan drug designation and fast track status by the U.S. Food and Drug Administration for the potential treatment of ALS.

About The ALS Association
The ALS Association is the only national non-profit organization fighting Lou Gehrig’s Disease on every front. By leading the way in global research, providing assistance for people with ALS through a nationwide network of chapters, coordinating multidisciplinary care through certified clinical care centers, and fostering government partnerships, The Association builds hope and enhances quality of life while aggressively searching for new treatments and a cure. For more information about The ALS Association, visit our website at www.alsa.org.