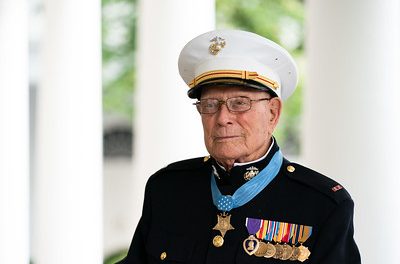 A few days ago, we paused to reflect on the death of Marine Corps legend Hershel “Woody” Williams. A Marine who served in Iwo Jima, Williams served his nation in the Second World War and was awarded the Medal of Honor. As the last living member of the so-called “Greatest Generation,” he earned the highest honor for valor and service to his country. In addition to his many honors, Williams was a humble man who never complained about his duties and always put the needs of his comrades above his own.

A West Virginia native, Mr. Williams was born and raised in Quiet Dell, a small rural community in Marion County. He attended a one-room school house and his parents operated a dairy. He was seventeen years old when the Japanese bombed Pearl Harbor. At the time, he was serving in the Civilian Conservation Corps, a New Deal work program. When the U.S. entered World War II, the Civilian Conservation Corps was disbanded.

After the war, Williams struggled with his experiences, but his Medal of Honor forced him to speak about them and encouraged him to help other veterans. After he returned home, he served for 20 years as a Marine and for the last ten years, he worked as the Commandant of the Barboursville Veterans Nursing Home, where he cared for dying veterans. While he was recovering from his wartime experiences, Williams continued to do what he could for his country, even into his final days.