By the Atlas Society, Special for US Daily Review.

Citing Ayn Rand’s stances on individual rights and her opposition to “crony capitalism,” Rep. Allen West (R-FL) describes the ways in which Atlas Shrugged has influenced him in this 8-minute video interview published by The Atlas Society.

Calling Rand’s novel “prescient,” West highlights what he considers to be a pivotal choice Americans will make: the choice between “economic freedom” and “economic dependency.” The latter starts with a “victim” mentality, West opines, and ends with excessive growth of government. 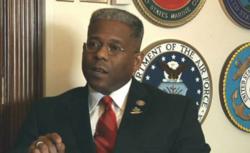 West comments that historically, government came to understand that it should limit itself to doing “those things which the individual or a private organization is not capable of doing.” He argues that by contrast, “[N]ow we have the government trying to subsume those things that the individual should be seeking to do for themselves, and the free market and the private sector.”

In the interview West advocates “getting back to individual sovereignty” and “a free market economy.” He urges listeners to understand that “investment, ingenuity, and innovation do not come from a centralized government structure. It comes from the individual.”

West on whether he’s been criticized for liking Atlas Shrugged: “I get criticized for a whole lot of things. But that does not bother me one bit, because as they say in the military, you only take flak if you’re over the target…”

On Rand, West adds: “So, it’s not about embracing an individual, but understanding some fundamental concepts and premises that she brought forth.”