I like Rick Santorum. He may be the best shot for conservatives in 2012, but I had it when anyone, particularly those running for President of the United States, cries “the devil made me do it,” in regards to actions they are taken against an opponent.  It is not much different than a parent catching several of her children misbehaving and they each cry “he (or she) did it first.” It does not work well with kids and we should tolerate it less with those running for the highest office in the land.

I am use to getting emails “from” Rick Santorum. I enjoy reading most of them, because I agree with much of his message.  The most recent one from his campaign caught my attention, it was not from the candidate, but his manager. My journalistic suspicions immediately began to arise. Did the campaign want the manager to be the “heavy” on this particular ad?

In it, the subject was simple and caught my attention, “ROMBO.” It begins with the headline, “Mitt Romney’s attack machine heads to Michigan” and ends with an explanation of why Santorum was releasing one of his own against Romney.  Classic.

Honestly, I don’t mind attack ads at all. In fact, the more in this GOP primary, the better, because whatever they face now will pale in comparison with what they will face from the Obama machine and the “mainstream media” that accompanies it.  What I object to are politicians who cry foul, when they participate in the exact same type of activity.  The ads are produced because we know they work.  Such commercials wiped out Romney in South Carolina, Gingrich in Florida, and so on.  Instead of belly aching, own them, and get on with the race.  If voters did not like such ads they would, proportionately, vote against those who make such. That is clearly not the case.

The Santorum people will argue it is not an attack ad at all. Check it out yourself and come to your own conclusions: 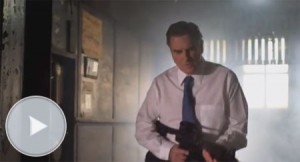