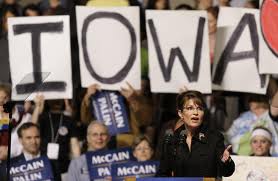 Editor’s Note: It is natural for anyone to run as the nominee for the Vice President and to lose to think they have a chance for the top job.  “If only I had been on the top of the ticket,” they might think.  The American people have seen Sarah Palin struggle with the results of 2008 and many believed that she offered the only fighting chance to John McCain. Others believe she was the final straw to a failing campaign.  In the mind of many, the only way she could prove either theory is by running.  Still, the former Alaskan governor has to struggle with the toils of the job and knows the kind of pressure she will face is different than her male counterparts (thanks to a media that seems hostile to conservative women). Many thought the entrance of Texas Governor Rick Perry would deter a run by Palin, but recent actions leaves room for doubt. It is late in the political season for anyone to jump in, but she will not state that she is out of the picture and she continues to make overtures at Iowa, the home of the first test of a presidential candidate, as seen in this recent blog post in the Wall Street Journal:

Former Alaska Gov. Sarah Palin continued to flirt with a presidential run Friday, releasing an Iowa-laden Web video that at least has the look of something made by a major campaign.

The more than 2-minute clip highlights Ms. Palin’s appearance at the Iowa State Fair last week, during which she received extensive media coverage. It also promotes her Labor Day weekend speech at a tea party event in Indianola, Iowa.

The last shot: a roaring grizzly bear on its hind legs. Ms. Palin’s signature and the words “Thank you Iowa! See you again September 3rd” then appear on screen.

Ms. Palin makes no indication that she now intends to run for president, and she has taken no serious steps toward a bid. But presidential candidates are perhaps the one demographic prone to releasing Web videos so heavy on Hawkeye State imagery.  Whether Ms. Palin runs or not, she is staying in the picture and garnering lots of media attention by being coy about her intentions.

The former governor is expected to make an announcement in September, with many people looking to her upcoming speech. She has said she’s undecided, and wants a candidate with “executive experience.” Most suspect Ms. Palin will… (read more)