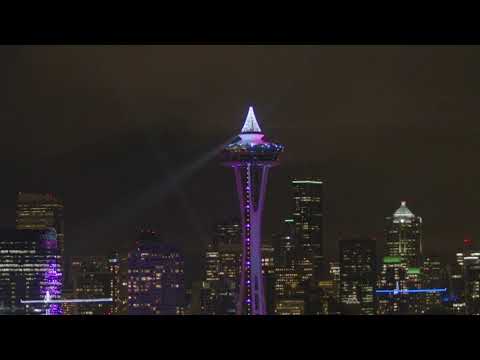 For the first time in the Space Needle’s history, the landmark’s 25th annual New Year’s Eve celebration—T-Mobile New Year’s at the Needle—will include a 30-minute musically-choreographed light show that begins at 10 p.m. on Monday, December 31. Over $1 million of cutting edge lighting equipment installed throughout the structure will emit brilliant colors and moving beams of light across the tower and the Seattle night sky, creating a dramatically enhanced New Year’s Eve spectacle.

The Space Needle, renowned for producing one of the best structure-launched fireworks displays in the world, is enhancing the New Year’s Eve experience to celebrate a marquee year for the tower. The 56-year-old landmark recently added more than 176 tons of glass to its structure, including The Loupe—the world’s first and only revolving glass floor.

Produced in collaboration with Pyro Spectaculars and Illuminate Production Services Inc., the Space Needle’s iconic fireworks show will begin at 11:59 p.m. on Monday, December 31, and will also include special lighting effects. As part of the show, the tower will launch several thousand pyrotechnics effects from the 605-foot structure.

The soundtrack for the light show features music by some of 2018’s hottest artists including The Weeknd and Kendrick Lamar, Imagine Dragons, Marshmello, Panic! At The Disco, One Republic and other popular stars.

This year’s music selection for the fireworks includes a list of influential female artists who have inspired and empowered people around the world.  The soundtrack includes hits by Beyoncé, Brandi Carlile, Lady Gaga, Heart, Montserrat Caballé and Vangelis, Keala Settle and concludes with “Respect” by the iconic and legendary Aretha Franklin.  Both soundtracks will be broadcast on iHeartRadio’s KISS 106.1 FM.