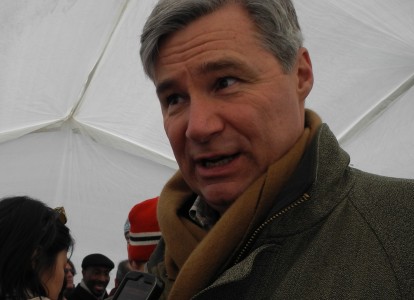 “We see significant sports facilities, the palaces of – of sport that are at risk from the storm, climate, sea-level rise effects of climate change,” Sen. Whitehouse said today following a closed-door climate discussion with executives from the NFL, NHL and NBA.

He said the threat to hockey is that people will no longer be able to play outdoors on frozen ponds:

“Without cold enough weather for frozen ponds, the kind of hockey that you play out of doors with your friends gets a little bit harder to achieve.”

“I took my kids skiing at Yawgoo Valley ski slopes in Rhode Island. The New York Times recently reported that we can expect all the ski slopes in Connecticut and Massachusetts to be gone.

“Obviously, given Rhode Island’s location, if that’s true of Connecticut and Massachusetts, that will also be unfortunately true of Rhode Island.”

The senator is no stranger to such Chicken Little scare tactics. In May 2013, Whitehouse blamed Republican inaction on climate change for deadly tornados in Oklahoma.

Check  it out here.