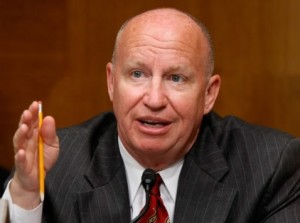 Rep. Kevin Brady (R-TX), Chairman of the Joint Economic Committee, responded to today’s report by the  Bureau of Analysis (BEA) that real gross domestic product (GDP) grew at an annual rate of 1.7% during the second quarter.

Brady noted, “Our economy is running at near stall speed, and without a change in policy, our economy will continue to struggle.”

“Over the four years since the recession ended the economy has grown at an anemic rate of 2.22% —half the average rate of growth during prior recoveries following 1960.”

Brady continued, “This recovery’s growth gap exceeds $1.3 trillion.  Until we close the growth gap with free market-oriented policies, job creation will continue at a slow speed and millions of Americans will continue to suffer unnecessarily.”

“While the revision to BEA’s methodology for estimating GDP makes the economy look bigger, it doesn’t make it any better.”