By Kevin Price, Publisher and Editor in Chief,  USDR 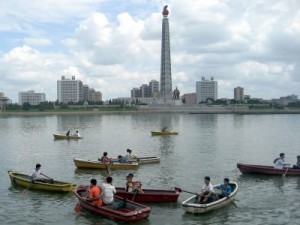 The recent Sony hacking disaster in which the government of North Korea allegedly brokered a deal to devastate one of the world’s largest movie studios and squash the release of a film (“The Interview”), may have a silver lining — at least for North Korea and others that would profit from crushing free speech. Imagine, making money from something they are actually passionate about. Isn’t that the dream of every human being? There are certainly few things the North Korean government is more excited about than oppressing human rights, including free  speech.

North Korea’s economy could certainly use the additional revenue. North Koreans have a paltry manufacturing base and a small mineral industry, other than that, their economy is really rather murky, filled with illegal activities. It is the perfect suited to go into the extortion and “enterterrorism” (entertainment meets terrorism)  business.

“North Korean citizens, including government officials have been involved in drug trafficking for years, according to the CIA World Factbook. It said in recent years North Korea had been linked to large shipments of heroin and  methamphetamine.

“Other illegal exports North Korea had intended for foreigners had come back to bite the country, Jang said. Counterfeit notes proved to be too poor a quality for foreign use but had ended up on the North Korean market. The problem was so widespread that Pyongyang would not accept widely counterfeit $100 notes for loyalty offerings, insisting $50 notes were paid instead, he said. For its part, the North Koreans have denied any involvement in  counterfeiting.

“Similarly, recreational drugs intended for international criminal markets had instead become a domestic headache, with many North Koreans now suffering from addiction to drugs such as meth and opium, he  said.”

So, here is how the new business model could work. Minority activists believe a new movie discriminates against a certain ethnic group, so they hire the North Koreans to take that film “out” through a hacking and intimidation campaign. This could work with any special interest groups, including social conservative organizations that dislike another film that “attacks”, what they believe to be, fundamental moral values, so they hire the “Hermit Kingdom” to wage a campaign against the latest “trash” coming out of Hollywood. Environmentalists, mega corporations, religious cults, this lists goes on. Of course, they are going to have to have serious money to pay for such, but one gets the idea. In fact movie companies could even leverage this against their competition. Now you are talking serious money. Sure, this suggestion is a little tongue and cheek, but certainly not beyond the realm of  possibility.

The group that has facilitated the war against Sony has called itself the “Guardians of Peace”. It is more like the Guardians of Piece . Like a piece of the entertainment industry. A piece of Sony here, Warner Brothers there, you get the idea. How? Will you know cities have those tough neighborhoods with shops that need a little extra “protection” because there are simply not enough police? “Entrepreneurs” always seem to rise up to “protect” such businesses with what some might call extortion, while the “guardians” would call it merely “insurance.” The North Koreans might find themselves easily positioning themselves in such a role. They certainly have the moral flexibility and reputation to fulfill such a role very  naturally.

In the end, many will be wondering why Sony acquiesced to these cyber terrorists by declaring they will not release “The Interview.” The argument of public safety in theaters that we are hearing from the media and Sony itself does not add up. To recoup some money they could simply release it online or by DVD. It would likely still be an enormous financial success because of all the drama that has surrounded its release. One cannot help but get the impression that Sony made a deal with these terrorists. They made a deal with North Korea. One would have to conclude that such a deal was made, not because of potential terror in the theaters, but because of “smoking guns” that North Korea has on Sony. These could include even more inappropriate emails, potentially questionable deals, the list goes on. North Korea, which is often the butt of many jokes, will likely feel very emboldened by Sony’s move. No movie producer or any other industry that North Korea has hostility towards, is safe, thanks to Sony’s myopic and cowardly actions. Meanwhile, North Korea’s disdain for basic human rights, such as free speech, has become one of its more important exports virtually  overnight.

Under what appears to be tremendous pressure from the White House, it appears that Sony is going to release “The Interview” for free on the website Crackle. This will do nothing to placate those who are concerned about free speech. Sony will make very little (if anything) from a movie distributed for free (there are certainly ways to recoup some of the money, but very few). The decision to go the free distribution route means that movie companies like Sony will still weigh the potential opinions of despots about a film before they proceed with it. That will have a chilling effect on the world of entertainment and free  speech.