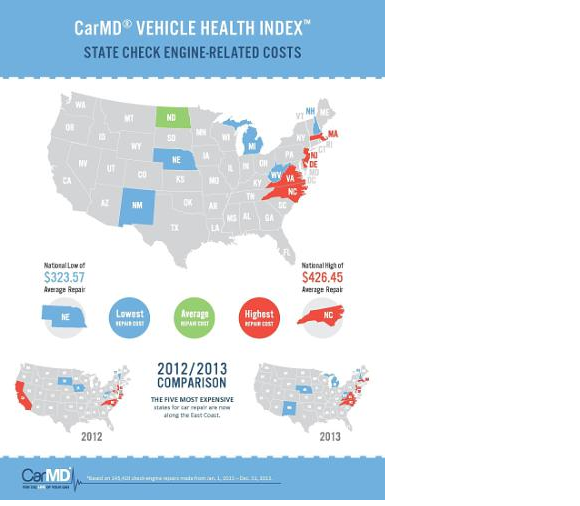 When the check engine light illuminates on the dashboard, drivers along the Eastern Seaboard now pay the most for related car repairs, according to CarMD’s analysis of more than 145,000 vehicles needing check engine repairs in 2013. Drivers in North Carolina, which is home to the most visited Great Smoky Mountains National Park, paid the most in the nation to have the check engine light diagnosed and repaired, at an average cost of$426.45. From 2012 to 2013, drivers in North Carolina saw at 9.37 percent jump in repair costs, including a 4.76 percent increase in parts and 17.53 percent increase in labor costs. Rounding out the five most expensive states are: Massachusetts(no. 2), Delaware (no. 3), New Jersey (no. 4) and Virginia (no. 5).

Vehicle owners paid the least for auto repairs in Nebraska at an average cost of $323.57 for parts and labor. California (no. 6) dropped out of the top five for the first time since CarMD has tracked repair costs; and New Mexico ranked no. 47, marking the first time a state from the West ranked among the five least expensive. The other most affordable states in which to get your car repaired are New Hampshire (no. 50); West Virginia (no. 49); and Michigan (no. 48). The least expensive states have several commonalities, including lower parts costs, and a lower percentage of pricey and catastrophic repairs such as anti-lock brake system, catalytic converter and transmission replacements demonstrating drivers in these states tend to take better care of their cars, address problems quickly, and may also be driving newer vehicles. The complete ranking is available atwww.carmd.com.

“While we are not able to control weather, gas prices and hard goods costs like car parts, as consumers we can minimize overall car ownership costs with preventative maintenance and swift attention to dashboard warnings like the check engine light,” says Doug Sobieski, chief marketing officer, CarMD.com Corp. “As drivers plan their summer road trips and year-round vehicle maintenance, we encourage them to make car maintenance and repairs a top priority to reduce  costs and maximize safety, regardless of where they reside or travel.”

CarMD’s ranking of the five states with the highest car repair costs in 2013:

CarMD ranking of the five states with the lowest car repair costs in 2013:

CarMD’s state-by-state ranking of repair costs was derived from analysis of 145,410 repairs for model year 1996 to 2013 vehicles from Jan. 1, 2013 through Dec. 31, 2013 by CarMD’s nationwide network of Automotive Service Excellence (ASE)-certified technicians. All 51 U.S. states/districts, including the District of Columbia, are represented in this Index. The repairs are related to a vehicle’s check engine system, which is standard on all vehicles manufactured since 1996. The on-board diagnostic (OBD2) system monitors approximately 80 percent of systems on these vehicles, triggering the check engine light when a problem occurs. The CarMD Vehicle Health Index database and average repair cost findings do not include problems that are outside the scope of a vehicle’s OBD2 computer monitoring such as tires, and mechanical parts like belts and hoses.

About CarMD
Based in Irvine, Calif., CarMD is a leading-edge Software as a Service (SaaS) solutions provider with products and applications that leverage and empower the capabilities of the on-board diagnostics (OBD2) port. CarMD’s network of Automotive Service Excellence (ASE)-certified technicians has built the largest, most up-to-date database of diagnostic trouble codes, expert repairs and related costs from which CarMD draws its Vehicle Health Index™, and supports its SaaS solutions and products like the award winning CarMD® Vehicle Health System™. For more information about this Index, including methodology and archived data, visit http://corp.carmd.com.  For information on CarMD’s products and third-party software service solutions and products, visit www.carmd.com.

(Below is a complete ranking of U.S. states/districts in order of most to least expensive car repair costs in 2013.)