On August 28, 2010 I was up around 4:30am to make my way to the Restoring Honor Rally being held at the Lincoln Memorial, as were most of the people at my hotel.  At the time, my husband was fighting the Taliban in Afghanistan, and my one-year-old daughter was with her grandmother in Arizona, where’d I’d return later that day.  A year later, we’re all at home together, still fighting for freedom, and hoping for a restored nation.

Why, you may ask, is this news worthy?  In my opinion, it’s because the Restoring Honor Rally really showed us the heartbeat of the American people, and the true state of the nation; not the sugarcoated media version.  Mr. Beck’s professed purpose of the rally was for the people “to demand better both from their leaders and themselves, to put principles like honor and integrity back in their rightful places, and to show the country that if we are a nation without faith then we are a nation without a future.”

Mr. Beck never intended for this rally to be political in nature.  In fact, on the website for the event, they specifically requested that no one bring any political signs or banners of and also stated that this event was to be peaceful.  As far as I could tell, the hundreds of thousands of rally attendees respected this request.

The reason I felt I had to go and be a part of that historic moment was because I knew my voice would be heard, simply with my presence.  I was angry about national debt, I was angry about the proposed socialist health care system being pushed by the President,  I was angry about industry bailouts – but most of all, I was angry because it seemed the President of the United States, my president, was not listening to me or the American people.  And every person I spoke with that day echoed my thoughts.  We went to Glenn Beck’s rally because of his message, but also because it was a rare chance for the “voter-class” Americans to stand together; to be heard – and it was effective to a degree.  Many people made fun of Glenn Beck, and said that no one would show for his rally – but we did.

Where is our nation today?  America successfully voted in a Republican majority to the House of Representatives in November.  And they fought strenuously for deficit reduction – but you can only fight for so long before you must compromise, and so the left won, like a teenager arguing with their parents for a credit card that will inevitably be abused – and the debt ceiling was raised.  Also, our President and his family continue to take luxurious vacations while the “unemployment rate in the United States was last reported at 9.1 percent in July of 2011.”   Finally, the housing market is still in very weak condition with no sign of improvements in the near future.  In other words, there has been no significant change to the state of the nation over the past year, but rather we are in unimaginable debt and the future does not look bright.  The American people still feel as strongly now as they did a year ago.

Some may argue that President Obama is a victim of circumstance, since he wasn’t in office when the housing market began to crash, and to a degree this is true.  However, if you recall, the housing market began to crash in 2007 because of Democrat Barney Frank, former House Banking Committee Chairman, encouraging Fannie Mae and Freddie Mac to authorize home loans to people who didn’t qualify for them.  So, while the start of the crash was not President Obama’s fault, the decisions he made after he took office are. Actions such as bailing out Freddie Mac and Fannie Mae among others with American tax dollars were done, against our will, and have contributed to the problems we face.  What the President should have done with all of those faltering industries was let them fail. Such is the ordinary course of the free market – which is a system that works naturally based on real supply and demand, and caters to the real needs of the American people.

The state of the nation is a sad one.  And as long as the market is manipulated, and the American people are ignored by our Democratic President, it will likely remain, in this depressed state. 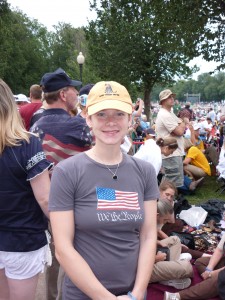 Heather at the Restoring Honor Rally

Heather Stone and her two-year-old daughter live in northern Italy, where her husband, who is active duty Air Force, is stationed. Heather currently works as an auto mechanic, and served in the United States Air Force from 2001 to 2007. After leaving the service, she worked for Boeing as a supply handler until her husband proposed marriage and they received orders that moved them to Italy.

Heather has an AA in Business Administration and plans to earn her BS in Environmental Science. Heather’s hobbies and interests for me consist of running when she gets the chance, writing, politics, and enjoying her family.