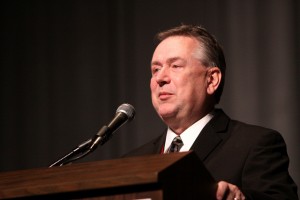 By the Price of Business, Radio Partners of US Daily Review.
M-F at 7 am CST on Business Talk 1110, hosted by US Daily Review Publisher/Editor in Chief, Kevin Price.
The the new Texas 36 Congressional District was created, most people thought it was designed for Republican State Senator Mike Jackson.  After all, his Senate District virtually overlapped the new Congressional District and he held his seat for over twenty. However, in spite of spend over a quarter of a million dollars, Jackson did not even get in to the runoff. Instead, that was left between a person who spent almost a half a million dollars to win the nomination and a former Congressman who spent around $25,000.  Steve Stockman getting into this runoff with such a shoestring budget, may turn out to be an even bigger Texas political story than the rise of Ted Cruz.  Stockman and Price visited about the surprising primary and what can be expected next in this very important Congressional race.
Part I:Steve Stockman and Kevin Price
Part II: Steve Stockman and Kevin Price
All opinions expressed on USDR are those of the author and not necessarily those of US Daily Review.