By Steve Parkhurst, Senior Editor at US Daily Review.

As I mentioned here on US Daily Review last week in my column titled “Avoiding The “S” Word“, Stimulus II, the son of the first stimulus disaster was indeed presented Monday by the current President. The so-called American Jobs Act is more of the same. This is not surprising from a failed President, and a man who had never created a job or balanced a budget prior to or during his reign as President, unless it was with taxpayer dollars.

What the current President has done is created a plan that would take money from the people, and from the “big, bad evil” corporations, and put it toward government jobs. The current President has chosen to increase taxes on business and close so-called loopholes, rather that freeing up much needed capital so that American businesses can build bigger and hire more. I understand the President not wanting to go with the latter plan, that would not create enough votes for his re-election campaign. A plan where he creates government jobs and takes money from the business community, well that helps with his anti-capitalist base.

View this chart and see for yourself: 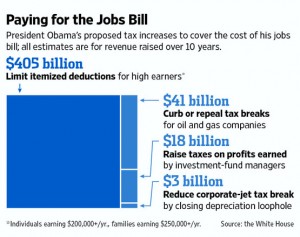 In Tuesday’s Wall Street Journal, House Majority Leader Eric Cantor had this to say about the current President’s plan, “Anything that is akin to a stimulus bill is not going to be acceptable,” he said. “Over half of the total dollar amount is so called stimulus spending. We have been there, done that. The country cannot afford more spending like a stimulus bill.”

When the current President gave his campaign speech during a joint session of congress last week, he kept repeating, “pass this bill right away”. This was an obvious attempt to show leadership from a President who has not been able to do so in any other way after 32 leaderless months in office. His bill that he wanted passed right away, is more of the same, as Majority Leader Cantor said, it is more of the same, it is more of what has already failed.

The Wall Street Journal also pointed out today, “The White House says the tax changes would take effect in 2013 and estimates they would raise $467 billion in additional revenue over 10 years.”  So if you are one of the many unemployed Americans, don’t worry, Obama’s so-called jobs plan will be put into effect in just 15 short months, be sure to go to the current President’s website and signup for emails on progress of that “plan”.

It was amazing to watch and think during the Republican presidential debate last night, that any one of the people on that stage, will do more for America and job creation as President-Elect in November and December of 2012, than the current President has actually done while in office. We just have to hope that the Hopers and Changers who find themselves unemployed this go-round will be on the side of capitalism and free markets, and not on the side of government funded, government mandated attempts at job creation.

Steve Parkhurst is a political consultant, a writer at his blog as well as a Senior Editor here at US Daily Review, where he maintains the Across The Pond feature. Follow Steve on Twitter @SteveParkhurst