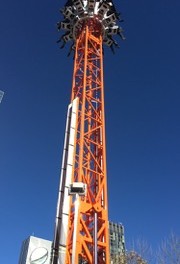 Football fans made their way to Houston, TX last week for the Super Bowl that took place on Sunday, but there was a lot more to the Super Bowl experience than just the “big game.” Downtown Houston was been transformed into the center for all things Super Bowl LI. Among the festivities, the Future Flight Journey to Mars drop tower ride was a surreal virtual reality experience for visitors of all  ages.

NASA is planning it’s first trip to the red planet, so a company called IDEAS out of Orlando, Florida pitched the Super Bowl Host Committee on a ride that married a drop tower and virtual reality so fans to experience their own Mission to Mars. The attraction was a team effort between NASA, IDEAS, GES (Global Experience Specialists), and A.R.M. Rides IDEAS, a media design company based out of Orlando, Florida, was the lead company on the project. They had done projects with NASA before, and when they were asked if they would like to be involved with an event in Houston focused around the Super Bowl they jumped at the  opportunity.

GES was a natural fit for the Future Flight attraction, since they already have a big AV (Augmented Reality) team in Houston and they are used to doing events like large exhibitions, conferences, and conventions. They also work with the movie studios and set up things like the Harry Potter and Avatar tour all over the  world.

IDEAS senior producer, Charles Moore recalls, “The Houston Super Bowl Committee was doing a short list of bidders to put together the ‘Wow Factor’ they were calling it, which is the main attraction area, and the sponsorship pavilion. IDEAS went into that mix as truthfully a very small player amongst very large companies. We went with a couple different approaches: A thrill attraction that had never been done before, a drop tower with virtual reality. The thinking behind that was, we knew this area was going to be themed and in name sponsored by NASA and its connection to the city, and where the city and NASA is going in the future. Well NASA’s going to Mars, and the city is becoming a technology hub, and so those two items fit really well  together.”

The team wanted to bring all the sponsors together in a pavilion to create what was called Houston Live. Rather than having numerous 10 x 10 tents spread around Super Bowl Live, they decided to house all the sponsors in a unified location to tell the story of the city, and how they connect with that in an experiential way. So, through a process they called Story Jam, came the story of what Houston Live, and what Future Flight as the wow factor, became. The 27,000 pound ride was manufactured by A.R.M Rides and tested in Wintervile, Ohio, then transported to downtown Houston, where a 142 foot crane was used to place it in the middle of Discovery Green park, without disturbing or causing any harm to the grass or  environment.

The drop tower looked intimidating, before getting on the ride, however once the VR headset goes on, you that you are on a ride. You have a front row view from a rocket on the launchpad as you await your launch into space. The virtual reality experience allows the rider to see what an astronaut might see as they leave the earth’s atmosphere and view the earth from space. From there it is short ride past the moon, and then on to Mars. Upon landing on Mars, the rider can look around and see the Mars Rover riding around and observe the red planet before making the trip back to Earth. It is a very exhilarating feeling as the ride launches from Mars and makes its descent back to Earth. Many of the astronauts who enjoyed the ride said it was very close to the feeling of an actual space shuttle launch, just a little less G-Force and the real thing lasts about as long as the entire ride  takes.

One might expect a ride like this to cause some riders to get sick, but there were no ill effects reported over the ten days of the attraction. This is because of a process that was used called “leading the viewer.” As Charles Moore explained it, “Visually everything is happening within a second before you feel it, so we’re preparing your mind for what’s about to  happen.”

While there were many attractions and events surrounding Super Bowl week in Houston, one of the best had to be the Future Flight! NASA is looking to make the trip to Mars around 2030, so the first astronauts to make the trip are currently in 4th or 5th grade. The journey to Mars will take about nine months, but on Future Flight you can make the trip and back in just over two  minutes. 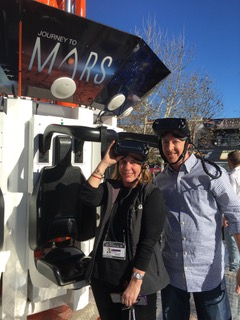