During the Occupy demonstrations, much of the protesters’ vitriol was aimed at the Top 1% of income earners in the United 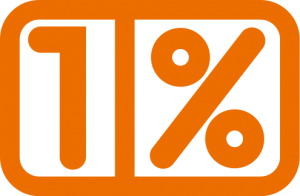 States. The mainstream media, along with many of the Occupy placards hoisted high for the benefit of that media and those consuming it, led us to believe that that 1% was comprised mainly of persons in the financial services industry.

It turns out that persons in the financial services industry do comprise a portion of the Top 1%, but that’s not the whole story. The 1% isn’t the 1% you think it is. It’s not dominated by the “evil banker.”

Before we look in more detail as to who actually fills out the ranks of the Top 1%, let’s first look at what defines the Top 1%.

Here’s the 2010 percentage scale of American income earners. This information comes from the U.S. Internal Revenue Service, via FinancialSamarai.com.

Definitionally, someone falls into the Top 1% if they earn in excess of $380,354 per year. Now that we know where the Top 1% begins, let’s take that look at who the Top 1% actually are. (The following list comes from “It’s the Inequality Stupid” which was published on MotherJones.com.)

From the above, we can plainly see that the financial services industry is represented in the Top 1% by just under 14%. So it’s clear that the Top 1% is not a demographic that is overrun with “evil bankers.” (And it would be my expectation that indeed most of the people in that slice of the Top 1% are not actually evil.)

Interesting as this demographic breakdown is, it omits a detail which is even more interesting.

There’s a common assumption in society that environmentalists don’t care about money. We’re conditioned to think that these folks care only about the environment. Not all assumptions, of course, are true. Maybe this assumption is another one of those.

The following list dispels the assumption that environmentalists don’t care about the money. In fact it shows that at least several of them care very much about the money and that concern lands them in the “Top 1%.”

The list below shows the CEO compensation for seven of the top U.S. environmental non-governmental organizations (NGOs). This information is gleaned from each organization’s U.S. Internal Revenue Service Form 990, a publicly accessible tax return. The 990s for these seven organizations were obtained via Guidestar.org. The compensation information shown is for the most recent fiscal year available.

Given the above, fully four of the seven top environmental CEOs are comfortably in the Top 1% of American income earners. Using a simple mathematical interpolation formula and the information shown in the list above, we see that the $352,450 and the $349,911 are in the Top 1.5% and the $235,786 is in the Top 3.6% bracket.

Not bad for non-capitalists who “don’t care about the money,” is it? (And it would be my expectation here that none of these people are actually “evil” either.)

So, the point that I’d like to make in this article is as follows.