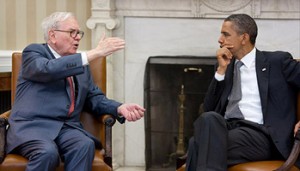 I have good news and I have bad news. The good news is that you have an extra day to pay up as the 15th falls on a Sunday this year.
The bad news – you’ve worked for the first 107 days of 2012 just to earn enough to pay your federal, state, and local taxes. And by the way – the date is four days later than in 2011, meaning that taxes across the board have gone up this year, this is according to the Tax Foundation, which computes Tax Freedom Day each year. This year Tax Freedom Day arrives on Tuesday, April 17, seven days later than in 2009, the year President Obama took office. I have more bad news for you: President Obama’s class warfare is alive and well!

Unemployment is up, consumer confidence is down, every one of the 50 U.S. States is in a budget crisis and… President Obama wants to raise taxes on those that contribute the most to the U.S. economy… does this make sense to you? If you have not heard of the Buffet Rule before, enjoy this: according to the White House website: “Under the current U.S. tax system, a number of millionaires pay a smaller percentage of their income in taxes than a significant proportion of middle class families. Warren Buffett, for example, pays a lower effective tax rate than his secretary, and that’s not fair. […] Anyone who does well for themselves should do their fair share in return, so that more people have the opportunity to get ahead—not just a few. ” Sounds good in theory, right? however, once you start to dig in a little deeper, it all falls apart.

First off, how do you define rich? According to the Federal Reserve, the top 5% of Americans have a net worth of $1.4 million and up. Why 5%? why not 10% or 1%? Once you poll American themselves on what they consider being “rich”, the answers are quite diverse:  A new survey by Chicago-based Spectrem Group on the Millionaire Corner  asked affluent households (as defined by those with assets of $500,000 or more) how much it takes to be rich.
22% said $1 million is enough to be rich. 45% said $5 million or more. 25% said $25 million or more. 8% said $100 million. So who’s rich and who’s not? Do you know?

Furthermore, not all folks making the same income make it through the same means.. some receive mostly a salary, others own businesses, and others receive income from investments. Each group of “rich” people receive a very different set of credits, exclusions or deductions.. You start to get the picture: a so-called simple rule is no more than a political soundbite.. The real problem is that we are again engaged in class warfare. It is very troubling that in a country that was founded on  the power of aspirations, hard work and ambition, the administration’s political rhetoric is to demonize those that embody those values.
Remember, Americans on average will pay almost 30 percent of their total income in taxes this year, more than on groceries, clothing, and shelter combined. Maybe we would all sleep better tonight if we knew that Washington had a grip on our budget or had some accountability on where our precious hard earned dollars went!

Time to Get Involved, Get Loud & Think on the Brink
About Malcolm Out Loud:  Social and political news commentator Malcolm Out Loud is also the host of WebTV show Malcolm Out Loud TV, an acclaimed motivational speaker, founder of Brink Thinking and the author of the book Smash The Competition. More about him at www.MalcolmOutLoud.TV