It is being reported that Ted Cruz was not going to stand in the way to a bill that would end the shutdown. But he is telling constituents that the battle to end Obamacare must continue.

In a statement to the media, Cruz said: 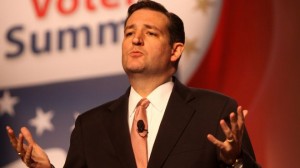 Ted Cruz is passionate about being the Senator for the whole state of Texas.

“Washington’s indifference to the plight of the American people has never been more apparent. Countless Americans all over the nation are being notified their premiums are skyrocketing. Others are losing jobs or seeing their work hours reduced, and thousands upon thousands are losing their healthcare plans altogether. All because of Obamacare.

“I am saddened to say that today, the Senate did nothing to help them. Washington did nothing. This town has created all the problems they are facing and refuses to do a single thing about it.

“The House of Representatives, however, deserves to be commended. They have taken a bold stance and listened to the American people, but unfortunately, the United States Senate has taken the traditional approach of protecting the status quo.

“Still, the deal made in Washington today provides no help to those who are scrambling to figure out how to afford insuring themselves and their families, or who are unable to get full-time work because of Obamacare. Washington decided to ignore their pain and suffering.

“Throughout this debate, I have had one standard for whether I would support any deal: ‘Does it provide meaningful relief for the millions of Americans who are being harmed by Obamacare?’ The answer is no.

“Obamacare is the nation’s number one job killer. To all the young people who are graduating from high school and college and are looking for jobs, Washington refuses to remove this obstacle that prevents them from climbing up the economic ladder. To all the single parents who are seeing their hours reduced to 29 hours to avoid Obamacare’s penalties for employers, Washington has turned a deaf ear to their pleas for help.

“As a result of Obamacare, families of special needs children will face a new penalty for using savings to pay for medical therapies and health-related expenses. That’s not part of the discussion. Seniors who are facing higher prescription drug costs as a result of this law won’t be given any consideration, either.

“Moreover, the Democrats have adopted the untenable position of forcing Americans to buy health insurance from a website that doesn’t even work. This is indefensible and indicative of the arrogance that underscores the entire law.

“President Obama promised Americans if Obamacare was made law, their premiums would drop, their taxes would stay low, millions of jobs would be created, and if they liked their healthcare they could keep it. It has failed on every single account.

“The fight against Obamacare must continue in the face of Washington’s apathy. That is where my attention will remain focused.”