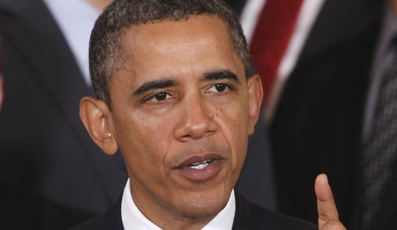 The man has some nerve, you have to give him that. Despite the huge brouhaha last year over the ever escalating national debt, learning to live within your means, budgeting, etc. Barack Obama is back with his hand out asking for another $1.2 trillion. He’s like a cavernous monster sucking up all the hard-earned money of the American taxpayer. He’s added more debt to the U.S. national debt than any other president in American History, and he keeps coming back with his hand out to Congress as if it is his right to continue spending taxpayer dollars wildly.

Then let’s look at his constant bypassing of Congress. Hey, I’ll admit No Child Left Behind is a huge disaster, but Barack Obama announced today he’s going to bypass Congress and issue waivers to 10 states struggling to meet the conditions of No Child Left Behind. And let us not forget his latest appointments while the U.S. Senate “was in recess.” But my favorite was his interview with Matt Lauer just before the Super Bowl, when he stated: “The founders designed a system that makes it more difficult to bring about change than I would like.” Barack Obama – Speaking with Matt Lauer, February 5th, 2012. Thank goodness for those “pesky” Founding Fathers.

But one of his most egregious acts comes once again at the hands of Obamacare, the gargantuan gargoyle on Barack Obama’s back. The Obama Administration, sweeping the U.S. Constitution out of the way, ordered the Catholic Church, and consequently all other churches, to go against their doctrines, values and principles and implement all aspects of Obamacare. For the Catholic Church contraception, the morning after pill, and ultimately abortions, violate every aspect of what they believe, that life is sacred.  When they asked for a religious exemption to the problematic portions of Obamacare, and they are legion, the Obama Administration denied their request. It’s only a matter of time before the rest of the churches will be forced to do the same.

And let us not forget that Barack Obama is systematically weakening our military when we are facing the greatest dangers we have ever faced. Just as with Jimmy Carter, Barack Obama now has a hostage crisis with Americans being held in Egypt. Iran is racing toward nuclear armament, Israel is preparing for war, the Middle East is exploding and in America, unemployment is still astronomically high, businesses are struggling, energy prices, and consequently everything else, continue to skyrocket. We barely survived Jimmy Carter, and we cannot survive Barack Obama’s incredible ineptness, inability to lead, and complete ignorance as to what we hold dear in America: God, family and country.

I believe we have become lost in the minutia of the Republican primary and have forgotten our ultimate goal. That is the defeat of the worst president these United States have ever seen, Barack Obama. His political sins are endless in number. His boneheaded moves equally numerous. This is indeed a battle between two ideologies: One where the government controls every aspect of your life, and the other where you have the freedom to choose, to grow, to learn, and to fight for your dreams.